You are here: Home / Archives for United States Supreme Court

The United States Supreme Court ruled last week that law enforcement generally must have a warrant in order to search the contents of cell phones.  Backers of Amendment 9 that appears on next month’s ballot in Missouri say that ruling illustrates the need for it to pass. It would protect all electronic data from unwarranted search and seizure.

“It lends further credibility to the fact that this is an issue that we need to codify within the Constitution in order to get protection from the state government,” says Representative Paul Curtman (R-Pacific), “and it also helps because it gives our courts parameters to work with.”

Curtman says Amendment 9 goes farther than the Court did.

“(The case decided by the Supreme Court) Riley v. California really focuses a lot more on … law enforcement’s jurisdiction with our smart phones,” says Curtman. “Our bill says electronic communications and data, and I think that people have a reasonable expectation of privacy even when they upload things into a secure cloud that only they would have access to, and that certainly isn’t just smartphones.”

Curtman says having those protections in the state’s Constitution also means they will be well-defined for the future.

“Courts change their opinions and definitions over time,” Curtman says, “so by having this in the Constitution it’ll help for the longevity of what it is that we’re trying to do.

The chief counsel representing the family that owns the Hobby Lobby chain of craft stores is an Associate Professor of Law at the University of Missouri, Josh Hawley. 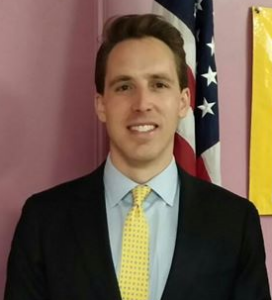 Associate Professor of Law at the University of Missouri, Josh Hawley

The U.S. Supreme Court has ruled in favor of that family, the David Green Family of Oklahoma City, who argued that Hobby Lobby should not have to provide insurance coverage for four types of birth control to its employees. The family says having to provide coverage for those four types of contraceptives would violate their religious objection to abortion.

“I would say that this is a decision about religious liberty and personal freedom,” says Hale, “and it comes down to, ‘Can Americans form their own their own religious and moral convictions without the government interfering, and can Americans practice those convictions in the workplace and everywhere?’ and the answer to that question is yes they can.”

Hawley says the ruling makes clear that the 1993 Religious Freedom Restoration Act applies to the owners of family owned corporations. He thinks it’s not likely that other types of corporations would seek such a ruling.

“The majority (of the Court) said, and I think they’re right, that it’s implausible that a large, publicly traded corporation would bring one of these suits just because you’d have to get buy-in from lots and lots of shareholders and conglomerates who hold shares.”
Critics argue that the ruling allows the owners of such a corporation to interfere in the personal health decisions of its female employees. Hawley says the case was never about access to contraception.

One of the findings of the Court was that the fines the Green family had faced for not providing the coverage in question were to have been particularly steep, “which is one of the reasons why, the Supreme Court said, that the government had indeed substantially burdened the Greens’ faith,” says Hawley.

“The Greens were facing $475-million in fines every year if they failed to comply with this contraceptive mandate, so that was a very substantial burden, indeed,” Hawley says. “That is one of the reasons, again, that the Court said you just cannot impose those kinds of burdens on people of faith unless you can show, ‘you’ being the government, that you have a very compelling interest, and the government couldn’t show that.”

The U.S. Supreme Court will take up a case tomorrow that could impact admissions at the University of Missouri and institutions nationwide.

The Supreme Court of the United States (photo courtesy, Britannica.com)

University of Missouri Professor of Higher Education Roger Worthington says the Court could also revisit at 2003 ruling that most institutions operate under now.

“The Grutter case against the University of Michigan in 2003 that set forth, or more clearly specified the provisions under which race conscious admissions were allowable in higher education.”

He says outcomes could include “either altering key principles of that earlier decision, supplanting the Grutter decision with a different doctrine rising from the Fisher case or potentially strike down affirmative action altogether.”

Some analysts are predicting the Grutter ruling will be striken down or at least substantially changed. Worthington says there are several reasons to think that, beginning with the makeup of the Court now compared to nine years ago.

“The typical swing justice is Justice (Anthony) Kennedy, who actually has a fairly clear record of ruling not in favor of affirmative action practices, so he’s likely to side with the more conservative justices, where he kind of goes back and forth between siding with the conservative and the more liberal justices on the court in different decisions. Also, with Justice (Elena) Kagan having recused herself, there will not be nine justices ruling on the case, there will only be eight.”

Worthington says with a lingering economic crisis, the nation’s population shifting toward a majority-minority population and what he calls an “eroded” education system, affirmative action is important for how the U.S. performs internationally.

“In my view, a dismantling of affirmative action at this time with that perfect storm of issues in front of us will ultimately become yet another setback for the nation in our effort to regain prominence in the global economic marketplace.”