You are here: Home / Archives for U.S. Sen. Jean Carnahan 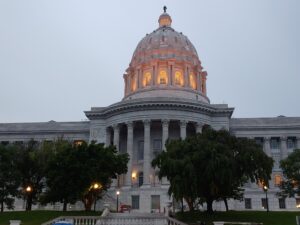 Their plane crashed during a storm and fog in the small town of Goldman, in eastern Missouri’s Jefferson County. Lieutenant Governor Roger Wilson (D) became governor for the last three months of Carnahan’s term. The crash made national news for several days.

He says Mel Carnahan was one of the most positive political figures in Missouri history.

“His attention to elementary, secondary and higher education has only been matched by one or two governors,” Wilson says.

Governor Carnahan championed the Outstanding Schools Act, which passed in 1993. Wilson also says agriculture and corrections were two other major priorities for the governor. Governor Carnahan guided the state through the historic flood of 1993, and joined President Bill Clinton at a major flood summit in 1993 in Arnold, south of St. Louis.

At the time of the crash, the Democratic governor was finishing his second term, and was locked in a heavyweight U.S. Senate race against Republican incumbent John Ashcroft. Wilson is proud of how Missourians handled the tragedy, and he praises Ashcroft as well.

“The rancor that you see now in politics was not evident,” says Wilson. “John Ashcroft suspended his campaign ads.”

Missouri voters elected Carnahan to the Senate posthumously. Governor Wilson appointed Carnahan’s widow, Jean, to the Senate seat. During a Thursday interview with Missourinet, Wilson says she was the only reasonable person to appoint to the position.

“The reason being is that she was politically astute, she was Mel’s partner, she knew every in and out of the large decisions that were being made,” Wilson says.

Wilson says Jean Carnahan didn’t have much time to grieve. When Governor Carnahan was elected posthumously, Wilson wanted to give her as much time as she needed to decide whether to accept the appointment. He says Jean Carnahan said yes to Mel’s legacy, adding that she served the state extremely well. Wilson says he will always be grateful.

Click here to listen to Brian Hauswirth’s full nine-minute interview with former Missouri Governor Roger Wilson, reflecting on the 20th anniversary of Governor Carnahan’s death and on Carnahan’s legacy. The interview was recorded on October 15, 2020: