You are here: Home / Archives for U.S. Drought Monitor 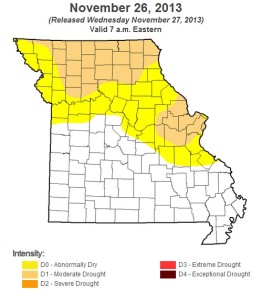 Two more percent of Missouri is categorized as being in drought conditions according to the latest update from the U.S. Drought Monitor, released this morning.

A look at the Drought Monitor Map reveals that “abnormally dry” conditions have spread farther south, particularly in the Kansas City area. Three percent more of the state is listed in that category than in the previous week. Slightly less of the state is considered to be in “moderate drought.”

The Seasonal Drought Outlook released last week by the National Weather Service’s Climate Prediction Center includes a prediction that drought in Missouri will persist or intensify through February 28, 2014. 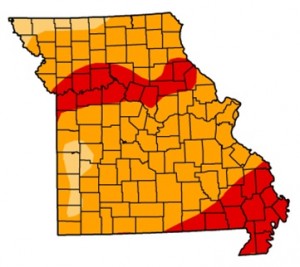 Click on the image to go to the latest U.S. Drought Monitor update for Missouri.

The latest U.S. Drought Monitor illustrates the continued intensifying of the drought across Missouri, and throughout the country.

About 23 percent of the state is now in the “extreme” drought stage, the second highest. That touches 16 counties in southeast Missouri and has spread to part or all of 24 counties in north-central Missouri.

Over 70 percent of the state is in what the Monitor calls “severe” drought, and the rest in “moderate.”

A narrow strip of Mississippi County is classified as in “exceptional” drought, part of an area that extends into Kentucky, southern Illinois and southern Indiana.

One of the tools used by federal officials in assessing drought and making decisions about it is the U.S. Drought Monitor. Its information could play a role in what Ag Secretary Tom Vilsack does with Governor Jay Nixon’s request that every county in the state be declared a disaster area due to drought.

Click the image to go to the Drought Impact Reporter

State Climatologist Pat Guinan says Missourians can make sure the people updating the Monitor have all the information. That can be done through the Drought Impact Reporter. “You provide your information in regard to where you’re reporting this impact from and what sort of impact you’re seeing, be it water shortages, livestock ponds that are low, pastures that are all burned up … you can even submit pictures of the impact that you’re witnessing at your area.”

Guinan says it makes a difference. “That information automatically gets submitted or dispatched to the Drought Monitor author, who then can use that sort of information to make assessments on the severity level of the drought that’s impacting the area. I’m a firm believer that the more people who participate in the drought decision process, the better the depiction or accurate portrayal that we will have of drought across the country.”

Guinan says he can’t predict what federal officials will do with the Governor’s disaster declaration request, but he says there is no doubt this drought is historic.

He says the streaks of triple-digit temperature days are also comparable to the 1980s and the dust bowl era. “Some locations in Missouri, we’ve seen 10, 11 days continuous streak of triple-digit heat. That’s something we haven’t seen in more than 30 years in some location. Some, in fact, 80 years.”

May 2012, the eighth dryest May on record in Missouri, is being followed by what will likely be a June in the top 10 for dryness as well. University of Missouri climatologist Pat Guinan says if you want this drought to end, that’s not a good omen. 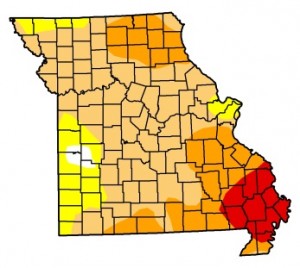 Guinan says May and June usually make up the wettest two-month period in a year in Missouri, with around 10 inches of rain. So far the two months have seen only about 4 inches. That’s drawing comparisons to 1988, when began a drought that lasted two years.

“That was a historic drought that impacted much of the central and western part of the country,” he tells Missourinet. “In fact, when you look at the economic damage that was due to the 1988 drought you have to go all the way back to the dust bowl years of the 1930s.”

Guinan says triple digit numbers are also unusual in the month of June another fact he says compares to 1988.

There is no sign that the hot, dry pattern is going to lift.

“The latest (outlook) for the month of July is not encouraging,” he says. “They are indicating above normal temperatures and below normal precipitation across all of Missouri.”

The latest U.S. Drought Monitor information has 13 counties in southeast Missouri all or partly in extreme drought.

Drought conditions are worsening across the state, but are still not serious enough that the Department of Natural Resources has activated its drought response plan. 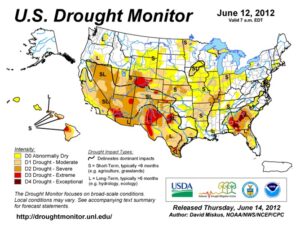 Water Resources Center director Ryan Miller says conditions are getting close to those triggers, however. He says DNR is closely monitoring the situation and working with local and national agencies. “We do have some areas of moderate drought in both northeast and southeast Missouri, and then some areas of severe drought in extreme southeast Missouri. We’re continuing to discuss long-term climate and weather forecasts, also looking at things like groundwater levels, stream flows and other hydrologic indicators that we have as part of our assessment tools.”

Miller says there are several signs DNR looks for to begin implementing its plan. “Looking at stream flows, looking at groundwater levels, looking at levels in many of the state’s reservoirs and water supply impoundments. Then, there are several, what are called “long-term drought indices,” primarily the Palmer Index, and that takes into account long-term soil moistures and other water in storage for the state.”

The impacts that have been reported to the Department so far all involve agriculture. Those have included slow emergence of crops, more expense associated with earlier and more frequent irrigation and the conditions of pasture and hay.  Miller says that is significant, but adds, “Thankfully we have not received any reports of impacts to public water supplies around the state, and we do continue to monitor reservoirs, the streams, the aquifers.”

The U.S. Drought Monitor’s next update will be available on Thursday.