You are here: Home / Archives for U.S. Attorney for the Eastern District of Missouri

U.S. Attorney General William Barr has announced today in St. Louis that a federal operation has led to the arrests of more than 650 suspects – 34 of which are accused of murder. The federal effort, called Operation Legend, is named after a four-year-old Kansas City boy killed over the summer while sleeping. 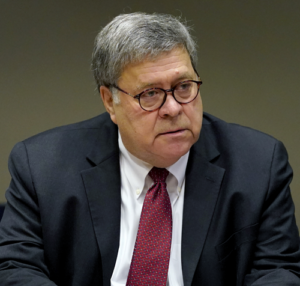 U.S. Attorney General William Barr meets with members of the St. Louis Police Department Thursday, Oct. 15, 2020, in St. Louis. The officers are among several in the department who have been shot in the line of duty this year. (AP Photo/Jeff Roberson, Pool)

The St. Louis initiative includes 124 agents from the U.S. Department of Homeland Security, FBI, ATF, DEA and U.S. Marshals Service. According to Barr, since the start of Operation Legend in St. Louis, the city’s murder rate has declined by 49% and reports of rape have dropped by 38%.

During today’s roundtable, Jeff Jensen, U.S. Attorney for the Eastern District of Missouri, says his office has never prosecuted so many people in a short period of time.

“In an unprecedented surge of gun violence over the past sixteen weeks, St. Louis at its peak has averaged as many as 10 homicides per week, bringing us currently up to 212 homicides compared to 161 at the same time last year,” says Hayden.

He says nine officers and a retired police captain have been shot since June – two were killed.

“The violence which we have experienced this summer against our police officers is none like we have ever encountered in the history of our department,” he says. “In spite of this ongoing violence directed at our officers, they have continued to demonstrate a superior level of courage, dedication and restraint.”

The anti-crime program has been launched in nine U.S. cities. Barr says more than 5,000 people have been arrested nationwide since the effort started earlier this year.