You are here: Home / Archives for Turner Fix

House Republicans say they have achieved most of their slate of legislative priorities for the session heading into Spring Break, but House Democrats say one top priority has been absent from floor debate. An education bill has yet to advance out of the committee process. 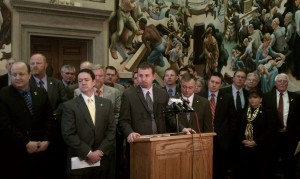 The House Republican Caucus, lead by House Speaker Steven Tilley, says it has reached most of its legislative goals so far.

House Speaker Steven Tilley (R-Perryville) says those bills are still being worked on but right now there is no consensus in his caucus on them. While leadership in both parties called education a “must pass” issue early on, Tilley now says, “If we can get it done we certainly well and if we can’t, we can’t, and we’ll come back next year and work on it.”

Several GOP leaders said from the outset that they want to package together education issues this year. That could put the issues both parties are concerned with, fixes for the foundation formula and the Turner decision, in a bill with things like tuition tax credits and tenure reform.

Tilley stands by that plan. “Part of the logic between the leadership team is to try and put parts of it together so it actually could cobble together coalitions to get us to 82 (votes in the House).”

Minority Leader Mike Talboy (D-Kansas City) has his own opinion of the Republicans’ motivation. “I realize that they have (St. Louis philanthropist) Rex Sinquefield to answer to, and if Daddy Rex says that something needs to be in there then Daddy Rex is going to get what he wants.” 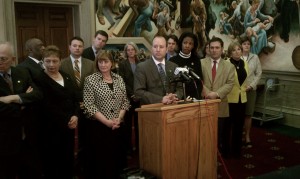 Tilley says if an education bill does not pass, the session can still be called a success. “I’m not gonna pin any specific thing on whether it’s a success or a failure. I think you have to look at the session in totality.”

He adds, “But, it certainly would be something I’d like to get done.” 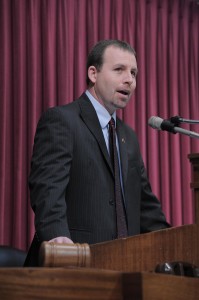 State lawmakers are faced with several challenging education issues in the young legislative session. Facing them first is the question of whether to deal with those issues together, or individually.

The school funding foundation formula was not designed to work when not fully funded. That is at the top of the list along with a “Turner fix,” addressing how to deal with students being transferred from failing schools to neighboring districts.

House Speaker Steven Tilley (R-Perryville) has said he wants to package those with other issues that could include enacting tax credits to support private school attendance and repealing teacher tenure protections. “I think the only thing worse than putting them together is to continue to shuffle kids through failing schools, which is what we’ve done for now a decade or more.”

Tilley adds, “Since I’ve been here for seven years the opposition to trying to trying to step outside the box and try something new has been tremendous. These same people that have been fighting us tooth and nail to try and challenge the status quo now want us to come in and fix the problem for them.”

The Speaker says the House and Senate education committee chairs agree with the idea of bundling issues. The Chair of the Joint Education Committee wants to keep them separated, however.

Representative Mike Thomson (R-Maryville) says his bill to lay out how education money should be distributed when the foundation formula is not fully supported died in the Senate last year because too much was attached to it. “What happened last year is that some of the other issues entered in and there were some people in the Senate that said, ‘Hey listen, we’re not letting anything go through unless we get what we want.’ The Turner Fix was one of those things.”

Thomson says the student transfer issue and the foundation formula are two unrelated items. “That’s what is so frustrating in this place is that we have different issues that we need to deal with and to hold a bill that is so necessary for the survival of our schools hostage because of personal biases or political purposes, to me, is absurd.”

Thomson says he is not talking about any individual person or cause. 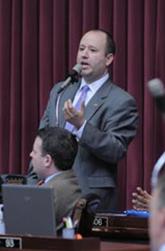 House Minority Leader Mike Talboy (D-Kansas City) says he looks at the education questions much like Speaker Tilley has looked at economic development issues, which Tilley says he wants to deal with individually after they failed in the special session. Says Talboy, “We have certain aspects of education that have been tried, have failed, as far as votes on the floor.”

Talboy says discussing other proposals is healthy, but, “if you know that there is significant and majority opposition to certain things, that becomes where you’re going. There’s an insistence on making sure that’s there even though there’s this rampant opposition.”

Discussion of education issues will ramp up quickly this week, with meetings scheduled for the House Committees on Education Appropriations and Elementary and Secondary Education, the Senate Education Committee and the Joint Committee on Education.

Beside the budget, education will be one of the primary topics in the 2012 legislative session. The primary issue is what some are calling a crisis, in the need to reform the foundation formula. 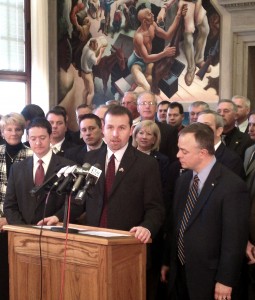 On the opening day House Speaker Steven Tilley (R-Perryville) outlined his “Blueprint for Missouri,” highlighting key issues in several areas including education. Along with the foundation formula it lists reform of laws governing student transfers and establishment of tuition tax credits for students in unaccredited districts, expansion of charter schools statewide, and creation of what Republicans are calling the “Missouri Teacher Quality Act.”

Tilley plans to tie those issues together. “We feel like if we’re going to do the Turner fix, which we believe we should, if we’re going to rework the foundation formula because it was never intended to be partially funded, which we should, we also believe in return we should get some long sought after reforms which we think are important.”

The Perryville republican says it’s time some of these issues are passed. “The reality is that we’ve tried to achieve some meaningful reforms, and the ‘educrats’ and the groups that just say ‘no’ to everything just keep saying no, and so we haven’t been able to get over the hill on the education reform and I think this may present a window that we can do it.” 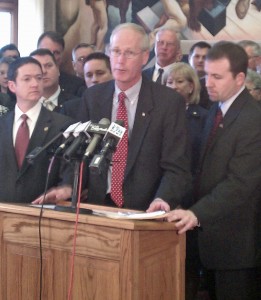 Representative Rick Stream (R-Kirkwood) discusses education issues with the media after day one of the new session.

Representative Rick Stream (R-Kirkwood) discussed the issue of charter schools. Last year he sponsored a bill that would have expanded them in unaccredited and provisionally accredited districts. “That’ll be the starting point for this year. We may scale it back to just unaccredited, because it barely passed the house last year and it didn’t get through the Senate.”

Stream filed legislation in 2011 that he called the “Turner fix.” It was “…to limit the number (of students being transferred) to the space that the school districts had available at the time.”

The other issues included in Tilley’s “Blueprint for Missouri” include: