You are here: Home / Archives for Truman State 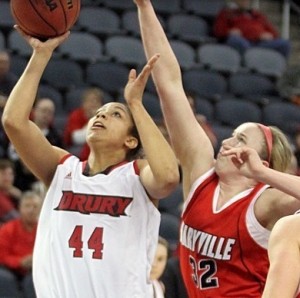 Maryville University has advanced to Saturday’s semifinals of the  GLVC Championship Tournament following a late bucket by senior Samantha Robinson to get the victory over top-seeded Drury University on Thursday at the Ford Center in Evansville, Ind. No. 8 seed Maryville succeeded in the biggest upset in GLVC Tournament history as the Saints were led by Shelby Miller and Robinson with 11 points each and Alex Hillyer adding 10. Sanayika Shields led all scorers with 17 points for the Panthers who came into the game ranked No. 6 in the USA Today/WBCATop 25 poll.

Another upset as newcomers Truman State took down reigning GLVC Champion Lewis by a score of 84-70 on Thursday at the Ford Center in Evansville, Ind. The No. 7 seed Bulldogs were led by Bianca Szafarowicz with 22 points and 8 rebounds, while three other players scored in double digits. For the Flyers, Mariyah Henley and Jamie Johnson scored 23 and 22 points, respectively; Henley also contributed 16 boards for Lewis.

The University of Indianapolis has advanced to Saturday’s semifinals  following a 78-74 victory over fifth-seeded University of Missouri-St. Louis on Thursday at the Ford Center in Evansville, Ind. No. 4 seed UIndy was led by Eliza Wortman, who came off the bench to score 21 points on 10-of-13 shooting. Alexis Lawrence and Alyssa Like scored 22 and 21 points, respectively, while Hazaria Washington notched 18 points and 14 boards in the loss. 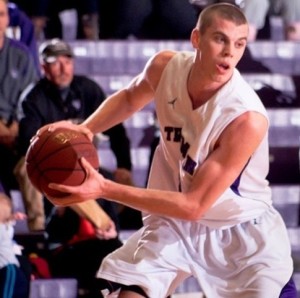 Mike Carlson, a senior at Truman State University in Kirksville,  was named the Great Lakes Valley Conference’s co-Player of the Year on Tuesday afternoon, becoming the first Truman men’s basketball player in program history to earn the honor.  The Superior, Wis.-native led the Bulldogs at 21.3 points and 7.2 rebounds per game while shooting 54.4 percent from the field. He started all 27 games en route to finishing the season second all-time on the program’s single-season scoring chart

GLVC First Team
Mike Carlson Truman St SR
Kameron Bundy Drury SO
Bryce Foster Mo. S&T SR
Aaron Nelson Southern Ind. SR
Keisten Jones Bellarmine SR
Asa Toney Maryville SR
Tylor Wimbish Mo.-St. Louis JR
Reece Cheatham Indianapolis SR
Joe Lawson Indianapolis JR
Ryan Jackson Lewis JR
Ziggy Riauka UW-Parkside JR
Carlson is eighth all-time in career scoring at Truman with 1,326 points in 82 contests. He was among the GLVC leaders all season in scoring, rebounding, free throw percentage, and blocked shots while also averaging 32.4 minutes per game. In addition, Carlson recorded two of the top-four single-game scoring totals in Truman history this season, including a program-record 48 points against Missouri S&T on Jan. 30, 2014. He added six double-doubles, led the Bulldogs in scoring in 15 of the team’s 27 games, and was the league’s Player of the Week on two occasions – Jan. 20 and March 3.
Having helped guide the Bulldogs to just their sixth 20-win season in program history, Carlson becomes Truman’s first conference Player of the Year honoree and the first, first-team selection since 2005-06 when Andy Calmes was last named to the first-team in the Mid-America Intercollegiate Athletics Association (MIAA). Carlson shares the 2013-14 top billing with Southern Indiana’s Aaron Nelson, who averaged 19.8 points and 13.2 rebounds per game for the 22-5 Screaming Eagles.
Along with Carlson and Nelson sharing the Player of the Year honors, William Jewell’s D’Vante Mosby picked up the GLVC Freshman of the Year award. Stan Gouard of Indianapolis was named the league’s Coach of the Year after guiding the Greyhounds to a share of the East Division title.

The Central Missouri Jennies volleyball team was ranked No. 2 in the initial NCAA-II Central Region Rankings released on Wednesday night. The Jennies are 26-1 overall and currently sit atop the MIAA standings at 12-1 in league play. Concordia-St. Paul holds down the No. 1 spot followed by UCM, Washburn, Minnesota-Duluth and Southwest Minnesota State rounding out the top five. The only other MIAA team in the top 10 is Nebraska-Kearney at No. 7.

The top eight teams in the final regional rankings on Monday, Nov. 25 will receive a bid to the Division II Central Regional at a campus site to be determined.

The Truman volleyball team was ranked seventh in the first NCAA-II Midwest regional ranking.  The Bulldogs are one of five GLVC programs to be listed in the top-10, as Truman sits between No. 6 Lewis and No. 8 Indianapolis in the first of three regional polls leading up to Selection Monday on Nov. 25. Southern Indiana checks in at No. 3, while Rockhurst landed at No. 10.

Junior punter Jacob Lamp has been selected as the Great Lakes Valley Conference Special Teams Player of the Week. Lamp averaged 45.2 on four punts with a long of 55 in the Bulldogs 24-23 victory over William Penn (Iowa) on Saturday night.

Lamp, a Kirksville native, is averaging 45.5 yards on 15 punts in his first full season as the Bulldog punter. Of his 15 punts, six have gone for 50-plus yards and nine have been placed inside the opponent’s 20 yard line. Only two punts have been returned this season for a total of one yard.

On Saturday against the Statesmen, Lamp’s first punt was his shortest of the night at 33 yards but was placed inside the William Penn two. He then had punts of 44 and 48 yards before hammering a 55 yard punt in the fourth quarter to help switch field positions.

Truman State University mourns the passing of Sam Lesseig, Associate Professor Emeritus of Mathematics and Head Women’s Golf Coach. Lesseig joined the university as a member of the Mathematics department in 1963 and started the women’s golf program in 1985.  He was the only head coach in the 28-year history of the Truman women’s golf team after helping a motivated group of golfers initiate the program.

Lesseig coached two all-Americans and 14 academic all-Americans while leading the Bulldogs to 11 postseason appearances at the National Golf Coaches Association Division II National Championships and the NCAA Division II and III Women’s Golf Championships. In 1999-2000, four members of the team were named to the NGCA all-academic team, the most in school history.

The Bulldogs qualified as a team for the inaugural NCAA meet and returned as a squad after a thrilling second place playoff finish at regionals in 2006-07. Truman finished eighth that year at the national meet held in Houston, Texas. Lesseig served on the NCAA Women’s Golf Committee for a total of nine years and was Truman’s interim athletics director during the 1988-89 school year.

He is survived by his wife, Dee, and their three children. Sons Vance (’87) and Corey (’89) both competed for the men’s golf team at Truman, while his daughter Kristen (’88) was a two-time academic all-American for the women’s squad.

The Truman Athletics Department became the 16th member of the Great Lakes Valley Conference, which became official today, following a century-long partnership with the MIAA.

GLVC History & General Information
The GLVC was established in 1978 when six schools – five from Indiana and one from Ohio – united to form the new league. Throughout the years, 16 different institutions have joined the league, while six have departed for either the NCAA Div. I level or other NCAA Div. II conferences. The resulting realignment has resulted in seven schools residing in the state of Missouri – a league-high – with four others holding residence in Illinois. Three Indiana programs, and one apiece from both Wisconsin and Kentucky round out the current 16-team conference.

The conference sponsors 20 championships in baseball, basketball, cross country, football, golf, soccer, swimming, indoor and outdoor track & field, and tennis for men and basketball, cross country, softball, soccer, swimming, tennis, indoor and outdoor track & field, golf, and volleyball for women. Truman will field teams for 19 of those 20 championships, with wrestling remaining an affiliate member of the MIAA to compete in its league championship.

END_OF_DOCUMENT_TOKEN_TO_BE_REPLACED

Hours after the Truman softball team suffered its first loss of the 2013 season, freshman Kindra Henze and senior Kirsten Krause combined for the program’s eighth no-hitter since 1999 to pick up a day one split at the MIAA/NSIC Crossover on Sunday.

Henze (Palmyra, Mo., Palmyra) struck out 10 of the 12 batters she faced, including the first five to start the game, while Krause (St. Louis, Mo., Parkway North) added another strikeout in the fifth as Truman cruised to an 8-0 abbreviated 5-inning win against Sioux Falls (S.D.). The Bulldog win capped the day with a victory after coming up on the short end of an 8-6 loss to Upper Iowa in the opener.

The Bulldogs return to action with two games on Sunday, taking on Winona (Minn.) State at noon before facing Concordia-St. Paul (Minn.) at 2:00 pm.

The Jennies were led by a double-double from Carly Sojka who had 13 kills and 12 digs. Bradye Peniston hit .344 and added 13 kills and six blocks in the UCM effort. Julia Bates added 42 assists and seven digs. Annie Reilly had 13 digs for the Jennies from her libero position.

Central Missouri finishes the season with a record of 26-7.

Truman struggled on the attack hitting just .097 as they fell 3-0 in their opening round match up with Southwestern Minnesota State at the NCAA Division II Central Regional. The Bulldogs did have a strong afternoon around the net finishing with 10 total blocks, five more than the Mustangs.

The Bulldogs were led by Megan Sharpe who hit .381 with nine kills and four blocks. Allie Brak and Abby Heise added seven kills each. Meghan Zimmerman had 25 assists to lead the team.

Truman concludes their season with an overall record of 27-7.

The Truman Bulldogs five-game winning streak came to an end as Central Missouri defeated the Bulldogs 38-17 on Thursday night in front of an national television audience, as both Missouri D-II football schools were featured on the CBS Sports Network.

The Bulldogs took the opening possession and marched down the field only with one of their longest drives of the season going 12 plays and taking just under six minutes off but Derek Koon’s 43-yard field goal missed right.  Central then used their fast-paced offense and went 74-yards in a dozen plays with quarterback Colter Smith beating the Bulldog defended to the near pylon for the seven-yard TD run.

The two teams exchanged interceptions but the Bulldog turnover set up the Mules with a short field. Sean Gorman scored on a three-yard touchdown pass as Central took a 14-0 lead.  The Bulldog defense thought they got on the board as Dennis Walls picked off Smith and marched into the endzone but a holding call took the points off the board. On third down, Conrad Schottel found Dallas Grier in the endzone but after signaling touchdown the play was later ruled incomplete. The ‘Dogs were called for an illegal shift as well and Koon missed from 36 yards.

END_OF_DOCUMENT_TOKEN_TO_BE_REPLACED

The Truman Cheerleaders and Showgirls brought home seven trophies and two plaques from the recently completed University Cheer and Dance Association camps held at Missouri State University in Springfield.  The Cheerleaders swept the small co-ed division of the camp bringing home first place trophies in cheer, sideline, fight song and game day performances. They were voted Most Collegiate by the UCA staff for exemplifying what a college spirit squad should be.

The Showgirls received a second place trophy for the Home Routine evaluation and a Superior Trophy given to teams with the highest ribbon accumulation scores. The Showgirls also received a trophy for their fight song performance and were voted Most Improved Program by the UDA staff for the improvement over the past year.

Both squads are vital roles of the Truman game day experience and will be back in action when the Bulldog football team opens up the home season on September 8 at Stokes Stadium. The teams are under the direction of Coach Brandi Wriedt.