You are here: Home / Archives for Tropical Depression Cristobal

The National Weather Service (NWS) says Tropical Depression Cristobal will cause widespread rain across the state, especially in mid-Missouri. Columbia, Jefferson City, Sedalia and Lake of the Ozarks are expected to receive two to three inches, by Tuesday evening. 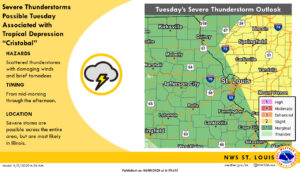 “It continues through most of the day (Tuesday), but it does move through fairly quick,” Johnson says. “By Tuesday evening, we only have a 30 percent chance and that’s by 7 o’clock,” Johnson says.

“Since a lot of this is falling at night, if you are driving at night, it is very difficult to tell how deep the water is you’re about to drive through. So, make sure that you know your routes,” says Johnson.

The NWS also says the heavy rains will likely cause new river flooding.

The St. Louis and Kansas City areas should see less than an inch of rain.

The NWS St. Louis office says while it’s not rare to see the remnants of tropical systems impacting Missouri, they normally happen in late summer or early fall.

The NWS says this is the earliest a tropical system has impacted the area on record. Before today, the two earliest occurrences were for remnants of unnamed storms that impacted far eastern Missouri on June 14, 1906 and on June 15, 1901.