You are here: Home / Archives for traffic fatalities

While passenger traffic in Missouri has plummeted due to the COVID-19 outbreak, Missouri state troopers say there’s been a three percent increase in traffic fatalities for the year.

Missouri State Highway Patrol Captain John Hotz says passenger traffic is down 47 percent statewide since March 13. Captain Hotz and the state Department of Transportation (MoDOT) say passenger traffic in both the Kansas City and St. Louis areas is down 49 percent in the past month.

Traffic Changes due to COVID-19

“It is alarming when you see the significant reduction in traffic and yet we’re still having the same number of fatal crashes, or even a little bit more than what had we had last year,” Hotz says.

There have been 174 traffic fatalities statewide in 2020, compared to 168 at this time last year.

“Now we (the Highway Patrol) are practicing social distancing just like everyone else, but in the end we have a job to do,” says Hotz. “And if we have people that are out there endangering themselves or others, we’re going to take enforcement action on that.”

And he warns motorists that increasing speeds increases the likelihood of serious injuries or death.

“We know the faster that you’re going when you have a traffic crash, the more severe that crash is going to be. There’s just no way around it, we can’t cheat the laws of physics,” Hotz says.

Captain Hotz tells Missourinet that three MoDOT trucks have been struck by motorists in the past week, despite the falling traffic volumes.

There were 879 traffic fatalities in Missouri in 2019.

Click here to listen to the full five-minute interview between Missourinet’s Brian Hauswirth and Missouri State Highway Patrol Captain John Hotz, which was recorded on April 2, 2020:

The Highway Patrol reports seven people were killed on Missouri roads over the Labor Day weekend. That’s even with last year, when seven people died in car accidents over the holiday. Two of the highway fatalities were motorcyclists.

Good news on the waterways though were no boating fatalities or drownings have been reported. The Water Patrol did investigate nine boating crashes, injuring seven, and arrested 14 people for boating while intoxicated. During the 2012 Labor Day weekend, officers investigated three boating crashes, which included one injury and no fatalities. One person drowned and seven people were arrested for boating while intoxicated during last year’s Labor Day weekend.

There were no fatalities on Friday, Aug. 30, 2013, during the counting period.

Three fatalities occurred on Saturday, Aug. 31. Justin M. Rohe, 25, of St. Charles died when he failed to stop at a red signal and struck the rear passenger side of a vehicle making a left turn. Rohe was ejected from the motorcycle he was driving. The crash occurred at the intersection of Mid Rivers Mall Drive and Ohmes Road in St. Charles County. St. Charles County emergency medical services pronounced Rohe dead at the scene. The driver of the other vehicle was not injured in the crash.

Dalton W. Coe, 15, of Seneca died when the vehicle in which he was a passenger crossed the centerline and the driver overcorrected. The vehicle then left the roadway, overturned, and struck a tree. Newton County Deputy Coroner Brian Artherton pronounced Coe dead at the scene. The driver and another passenger sustained moderate injuries. All three of the vehicle’s occupants were wearing seat belts. The crash occurred on Gum Road south of Joplin, in Newton County.

The St. Louis Police Department is investigating the remaining fatality on Aug. 31 — no further details are available.

One person died on Sunday, Sept. 1. Brandan A. Evans, 18, of Bronaugh died when the vehicle he was driving traveled off the left side of the roadway, overturned several times, and came to rest on its tires. Evans was not wearing a seat belt and was partially ejected from the vehicle. Dr. Tiffany Batiste, Freeman West Hospital, Joplin, pronounced Evans dead at the hospital. The crash occurred on Missouri Route BB, one mile south of Nevada, Vernon County. The Vernon County Sheriff’s Office also responded to the scene.

Three fatalities occurred on the Labor Day holiday, Monday, Sept. 2. Beth W. Adamson, 50, of Wichita, Kan., died when the driver of the vehicle in which she was a passenger failed to stop at a stop sign. The Adamson vehicle was then struck broadside. Dr. Buchele, Freeman West Hospital in Joplin, pronounced Adamson dead at the hospital. Both the driver and Adamson were wearing a seatbelt at the time of the crash; the driver sustained minor injuries. The driver of the other vehicle sustained serious injuries; he was not wearing a seat belt. The crash occurred 10 miles north of Joplin on Missouri Highway 43 in Jasper County.

Melissa K. Crossland, 45, of Richland died when the driver of the vehicle in which she was a passenger failed to negotiate a curve. The vehicle then traveled off the right side of the road, struck a tree, and overturned. Neither the driver nor Crossland were wearing a seatbelt at the time of the crash. Camden County Medical Examiner Jaimie Wheat pronounced Crossland dead at the scene. The driver sustained serious injuries. The crash occurred in Camden County on Missouri Route A east of Seven Springs Road.

The Ste. Genevieve Police Department is investigating the remaining fatality for Monday, Sept. 2. No further details are available.

The patrol says the fatality statistics reported today could change if late deaths occur, if other departments report fatal traffic/boating crashes after the numbers were released, or if a fatality is determined to be caused by a medical condition rather than traffic/boating incident.

The Patrol points out that numbers were likely to be higher this year since the counting period was more than three times longer. This year’s counting period and enforcement efforts stretched over four days since July 4 fell on a Thursday.

One person drowned on Friday, July 5.

Troopers also arrested 17 people for boating while intoxicated over the holiday counting period. During the 2012 July Fourth weekend, officers investigated six boating crashes, which included two injuries and no fatalities. One person drowned, two people were electrocuted, and seven people were arrested for boating while intoxicated during last year’s July Fourth weekend.

The Patrol says fatality statistics may change if someone dies from their injuries or if other law enforcement departments report fatal traffic crashes after today’s press release was sent out, or if a fatality is determined to be caused by a medical condition rather than traffic incident.

The Coalition for Roadway Safety has a new four-year plan and a new goal for reducing highway fatalities in the state. 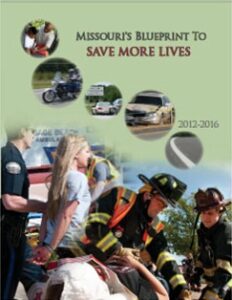 Click the link to view the updated Blueprint to Save More Lives (pdf).

The Coalition has set two goals in the past and both of those have been reached, most recently seeing the number of traffic fatalities annually in Missouri drop below 850 in 2010, two years earlier than the Coalition’s target. The new mark is to be at 700 or fewer, by 2016.

Department of Transportation Highway Safety Director Leanna Depue explains how the Coalition arrived at that figure.

“We look at our progress through the various years. We look at strategies that we think have opportunity to save more lives, we do some estimating about how many lives the various strategies would result in (saving), and then we identify a goal which we think would be challenging for us and yet we know that as a state if we’re able to implement our strategic highway safety plan, we should be able to reach.”

The plan includes the “Necessary Nine;” nine steps the Coalition recommends toward meeting that goal.

They include increasing use of seatbelts and the passage of a primary seat belt law, which would allow law enforcement to pull over drivers for not wearing a seat belt. Currently, law enforcement can ticket drivers who aren’t wearing seat belts, but can not pull them over for it.

A new goal is to change traffic safety culture. “We’re really wanting people to make good decisions because it’s just part of their every day operation,” Depue explains, “Not being motivated by a law enforcement officer or some other outside stimulus. We want them to just internally want to be safe.”

The Highway Patrol thinks getting to fewer than 700 highway fatalities in four years is attainable. Spokesman, Lieutenant John Hotz says, “While 700 sounds like a pretty high number, we’re working towards the overall goal of zero deaths. We know that last year was the first time since 1949 that we had actually seen fewer than 800 traffic fatalities on Missouri roadways, so we’re going to continue to do everything we can to work with MODOT and the other partners with the Missouri Coalition for Roadway Safety.”

Fatalities for the year in Missouri are up about 6 percent over last year, 684 by Tuesday compared to 641 by the same date in 2011. Hotz says after being dramatically higher earlier in the year, the increase has leveled off.

“We did have a mild winter and there were certainly more traffic deaths in the early part of the year … we’ve seen those numbers go down. They were as high as the 30 percent range in the spring.”

Between January and March, 59 more people died on Missouri highways than during the same period in 2011.