You are here: Home / Archives for Track and Field 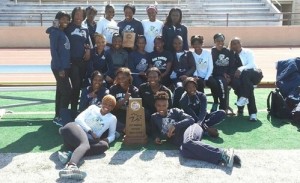 The three day MIAA Outdoor Men’s and Women’s Track and Field Championship came to an end Sunday in Hays, KS. with Lincoln University winning the women’s championship by more than 100 points over Pittsburg State. On the men’s side Pittsburg State edged out Missouri Southern to take home the title.

The Lincoln University women’s outdoor track and field team was picked as the early favorite by the United States Track and Field and Cross Country Coaches Association’ preseason poll. The Lincoln men were tabbed for seventh. Central Missouri’s men’s and women’s programs were picked as well…24th and 11th respectively. Missouri Southern was picked 12th on the men’s side.

The Lincoln women are the early favorite to snap Grand Valley State’s two-year hold on the D-II Outdoor team crown.  A title for the Blue Tigers would not only break GVSU’s streak, but also be a step toward reclaiming outdoor supremacy that saw them win six titles in a span of seven seasons from 2003-2009, including five straight from 2003-2007.

Chantae McMillian, a Rolla, Mo. native and the Heptathlon record holder at the University of Nebraska, started day one of the Heptathlon, competing in four of the seven events.  During the first two events in the morning, McMillian finished sixth in her heat in the 100 m hurdles and cleared 5’5 in the high jump. The shot put and 200 m run are later. McMillian is in 31st in the overall standings.

McMillan fared well in the shot put with a distance of 49 feet and then ran a 25.25 200 meter race.  After the first day, McMillan has 3602, well behind Jessica Ennis of Great Britain who leads with 4158 points.

Former Mizzou star Christian Cantwell is headed back to the Olympics after placing third in the shot put at the U.S. Olympic Track and Field Trials on Sunday afternoon. The 31 year old Eldon, MO. native took silver in 2008 at the Beijing Olympics.  In Eugene, OR., Cantwell’s throw of 69 feet, 9 3/4 inches finished behind, Reese Hoffa took first place with a throw of 72-2 1/4, and 2012 World Indoor Champion Ryan Whiting, who was second at 71-3/4.

Back in 2008, Cantwell lost to Tomasz Majewski of Poland for the gold medal. The following season Cantwell came back and defeated Majewski at the World Championships in Germany for his first major international championship. Cantwell is a three-time indoor champion and at 31 years old, has this year and possibly 2016 for a shot at Olympic gold.

The Mizzou track and field program wrapped up day one at the NCAA Championships in Des Moines, Iowa. Senior Lars Rise finished day one of the decathlon in ninth place overall with 4,048 points. He is still within striking distance of a national title, just 223 points off the lead.

END_OF_DOCUMENT_TOKEN_TO_BE_REPLACED

Lincoln University-Jefferson City, a longtime powerhouse in Division II track and field has their men’s and women’s programs ranked near number one in the national preseason rankings. In addition to the Blue Tigers, two other Missouri schools are ranked on the men’s side as well as two colleges on the women’s side.

On the men’s side, Lincoln is ranked second with Central Missouri fourth, while Missouri S & T makes the top 25 at 22nd. The Lincoln women are ranked third, followed closely by Central Missouri at sixth and Missouri Southern ranked 19th.

Cantwell, just last week in St. Charles made a throw of 73 feet, 4 inches for the longest throw in the world this year. His championship throw was over two feet shorter than that at 71.5 feet, but a foot longer than the second place finisher.

Cantwell also won this event in 2009 and was elected to the Drake Relays Hall of Fame for winning seven men’s shot put titles at this venue.

Former Missouri Tiger and defending World Champ in the shot put, Christian Cantwell will compete this weekend at the U.S.A. Outdoor Track and Field Championships in Des Moines, Iowa, an event he has won two times.

On Saturday, Cantwell threw that 16 pound ball 73 feet, three inches at the Lindenwood Throwing Series in St. Charles. That is the longest throw this year and while it was still over two feet away from the world record, he is the first shot puter to make 12 straight throws over 72 feet.

There will also be a few more former and current Missouri Tigers at the event this weekend. Chris Rohr is seeded fourth in the hammer throw, and Krishna Lee will compete as well. Juniors Blake Irwin and Aaron Dixon are running in the 800 meters, while senior Nick Adcock is in the decathlon.

Tiger decathletes Lars Rise and Nick Adcock are in 7th and 8th place respectively, in the men’s decathlon after day one of the event at the 2010 NCAA Outdoor Track and Field Championships in Eugene, OR.

END_OF_DOCUMENT_TOKEN_TO_BE_REPLACED

Both Aaron Dixon and Blake Irwin (Bettendorf, Iowa) finished seventh in their respective heats of the men’s 800m run at day one of the NCAA Championships at Hayward Field in Eugene, OR. on Wednesday (June 9).