You are here: Home / Archives for Tourism

The first trailer for a major motion picture shot in Cape Girardeau has been released.

“Gone Girl” is a movie about the disappearance of a woman in a troubled marriage, resulting in her husband becoming the prime suspect in the vanishing. It is set in the fictional Mississippi River town of North Carthage, Missouri.

See the new trailer below:

The number of foreign tourists visiting the United States is not what tourism boosters would like it to be, and Congress is taking steps to promote what America has to offer to foreigners thinking of coming to this country.

Congressman Roy Blunt (R-MO7) is among the co-sponsors of what is known as the Travel Promotion Act (HR 1035), which has been approved overwhelmingly in the U.S. House and is expected to pass the U.S. Senate when brought to the floor for a vote. END_OF_DOCUMENT_TOKEN_TO_BE_REPLACED

A $7 million cut to the state tourism budget is seen as a crippling blow to tourism efforts and counter-productive to those in the industry.

Governor Nixon, faced with slumping state revenues, ordered belt tightening throughout the state. He ordered $430 million to be withheld. The money will be released only if the economy turns around and state revenue rebounds.

The Department of Economic Development chose to cut $7 million from the Division of Tourism . The cut to Tourism and the Missouri Arts Council spared the department’s economic development programs from deeper cuts.

The past president of the Missouri Travel Council , Gary Figgins, says the move discloses a misunderstanding of the impact of tourism.

"Tourism employs somewhere in the neighborhood 290,000 people in Missouri," Figgins says. "Those aren’t jobs that pay $20 to $30 an hour, but they’re good jobs, they’re safe jobs and they’re jobs that are not going to be shipped overseas."

A spokesman for the Economic Development Department says the decision to cut $7 million from Tourism was based, in part, because Tourism has a $4 ½ million budget balance. Figgins counters that that’s a false balance, reflecting money allocated and spent in the last fiscal year. The bills just haven’t come due yet.

"Make no mistake about it, it’s a $7 million cut," Figgins says. "They’re just looking at numbers there that, for one reason or another, they just don’t understand how the advertising purchases are made."

The Missouri Travel Council calls the cut to Tourism inequitable. It contends the cut to Tourism represents nearly 64% of the $11.3 million in withholding requested of the Department of Economic Development. The cut will cause Tourism to drastically reduce advertising as well as hurt efforts to promote the state to group tour operators and other niche markets Missouri attractions rely on.

Figgins says the cut to Tourism ultimately is counter-productive. He points to studies that indicate every dollar spent on tourism returns nearly $50 in visitor expenditures. The Division of Tourism claims it generates $2.46 in state tax revenue for every dollar spent. Tourism ranks second behind agriculture as the top industries in Missouri. The Missouri Travel Council predicts the cut will have dire consequences both in the near and distant future.

St. Louis basks in the aftermath of the 80th Major League Baseball All-Star game and it appears Missouri tourism reap a windfall.

Baseball’s mid-summer classic couldn’t have come at a better time for a state stuck in recession.

"The international impact of this is quite pronounced as well," says Hall.

Hall says the research that the commission collects indicates that more and more international visitors are interested in visiting the Midwest. One of the attractions is baseball.

Then, there are the intangibles. Sure, the festivities drew an estimated 230,000 people to take in the five-day Fan Fest St. Louis sponsored, the Futures Game, the Home Run Derby and, finally, the All-Star Game itself. Those traveling to St. Louis spent money on hotel rooms and meals in restaurants. They bought souvenirs and visited other area attractions. It also gave people a chance to forget about their day-to-day struggles and enjoy being in the center of the baseball universe.

The success in St. Louis has sparked even more interest in Kansas City, hoping that a renovated Kauffman Stadium will host the All-Star game in 2012.

Travel clubs have been a boon to Branson, but not all travel clubs are legitimate.

A new law, HB 83 , seeks to crack down on those unscrupulous travel clubs. Gov. Nixon has signed the bill into law. Nixon says travel clubs deserve more praise than criticism, but some have blemished the industry.

"For too long a few unscrupulous travel clubs have tarnished the reputation of reputable clubs that play by the rules," Nixon says. "This bill will help sort out the bad apples and protect the rights of Missouri consumers. HB 83 will also give consumers from Missouri and across the country greater confidence in our tourism industry and help bring more visitors to the Show Me State."

Consumers have three days after joining a travel club to change their minds. Some clubs give away tickets or other token gifts and claim that by accepting, consumers give away that right. The new law doesn’t allow clubs to do that.

It also requires travel clubs to keep $250,000 on hand, so consumers can be refunded if they go belly up.

"I want to state clearly today there are many travel clubs that are honest and fair and do a great job, but this bill just protest us," Wood says. "If people coming to Missouri can’t trust us they won’t come."

Some Branson businesses have been burned by the unscrupulous clubs, honoring tickets the clubs never purchased so tourists don’t leave Missouri with a bad experience.

Governor Nixon says the Tour of Missouri will go on this year.

Nixon has rejected a recommendation from the Department of Economic Development to slash the $1.5 million state appropriation needed to fund the professional bicycle race. Supporters of the tour say that the race would have had to be cancelled without the state money. The Tour of Missouri is in the third year of a three-year contract.

In a written statement, Nixon acknowledged that state government must reduce spending, but that he believes the 2009 Tour of Missouri should go forward. Nixon did call for additional accountability and transparency on how state funds are spent.

Nixon has ordered the Office of Administration to seek complete accounting of how money was spent on the tour in 2007 and 2008. He wants a review of contracts for this year. According to the governor’s office, a representative from the Office of Administration has met with representatives of the Department of Economic Development, the Division of Tourism and Tour of Missouri, Inc. The governor’s office says the Division of Tourism and Tour of Missouri has agreed to share financial information and budgets with the office.

A spokesman for Nixon, Scott Holste, says the governor’s office received plenty of feedback from the public when it became news that state funding could be withheld.

"Well, on Friday of last week and on Monday and Tuesday of this week we did receive a fairly large volume of e-mails and telephone calls from people who were concerned about the race going on," Holste says.

An emergency conference call was held Friday by the Division of Tourism in an effort to save the race. 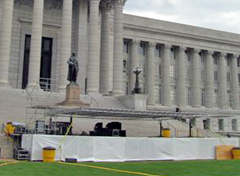 Preparations are nearly complete as the Capital City gets ready for its annual Independence Day celebration.

The two-day celebration features carnivals for the kids in downtown Jefferson City, plenty of food, music and an elaborate fireworks display, shot from a barge on the Missouri River over the State Capitol the night of the 4th.

The celebration is called Salute to America . It begins this evening with a parade a 6 o’clock, leading in to opening ceremonies this evening a 7:30pm. A Beatles tribute group, FabForever, performs on the stage in front of the Capitol.

Festivities continue tomorrow throughout the day. Starship with Mickey Thomas performs at 7 o’clock on the stage in front of the Capitol. Fireworks begin when it gets dark.

Tens of thousands annually attend the celebration, but Jefferson City expects even more this year because of high gas prices. The city is prepared for a crowd of 50,000 as Missourians choose to stay close to home to celebrate Independence Day.

Planning a vacation, but gas prices got you down? Governor Blunt suggests you stay close to home and explore what your own state has to offer. The governor and his family hope to lead by example. They have planned a three-day trip through the state.

Blunt and his family today hop into an RV to tour 12 Missouri state parks and historic sites. The trip begins at the Dillard Mill State Historic Site in Davisville. The birthplace of Mark Twain in Florida, the boyhood home of John J. Pershing in Laclede and the art studio of Thomas Hart Benton in Kansas City are on the itinerary, as are battlefields, settlements, and other historic sites.

What interests the governor the most?

"I’m probably most interested in those sites that relate to our early settlement," Blunt tells the Missourinet.

The governor and family will visit Ste. Genevieve, settled by the French, then get a taste of Germany’s influence on Missouri by stopping by Hermann. Ft. Davidson at Pilot Knob, the scene of one of Missouri’s bloodiest battles, and the Battle of Lexington are stops as the governor explores the state’s role in the Civil War.

Blunt hopes his trip encourages other Missourians to stay close to home this summer.

"The bottom line is we have some great sites to see in Missouri, some wonderful people to be around, to take some time off with your family," says Blunt, "With high gasoline prices, you don’t have to drive halfway across the country. We’ve got some great things to do right here."

The Blunts conclude their trip with a visit to Jefferson City to dedicate the Lewis and Clark Trailhead monument.

The Missouri Division of Tourism has released its annual report, which touts the importance of the tourist trade to the state’s economy. Tourism Director Blaine Luetkemeyer says funding received by the Division in Fiscal Year 2007 paid huge dividends – with state sales tax revenue increased 5.7 percent to $404.7 millon, and the number of people employed in the industry up 1.6 percent to a record 293,584.

Luetkemeyer says a big part of the success this past year was the Tour of Missouri bicycle race, which brought attention to Missouri from many Europeans who might not have heard of this state prior to the event. He points out that for every dollar the state of Missouri invests in marketing tourism, $49.47 is returned in visitor expenditures. Missouri is attempting to increase its tourism reach by targeting advertising at the Canadian and United Kingdom markets, as well as going after baby boomers and young families here at home. The Division’s new slogan is, "Close to home. Far from Ordinary."

Luetkemeyer says many Americans and foreigners want to come to the Midwest and Missouri must present itself as the home of Mark Twain, Jesse James, Route 66, and other pieces of Americana. 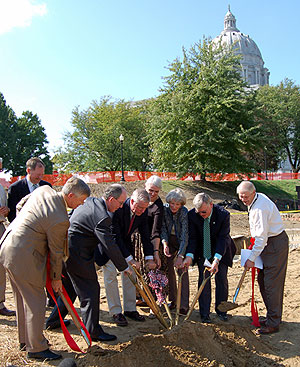 Musicians warmed the crowd for the ceremonial groundbreaking, though much ground has already been moved. Jefferson City Lewis and Clark Task Force Chairman Sally Sprague points out that her group has worked for seven years to make the monument a reality and jokes that it, "Certainly has taken us a little longer to come to this day than it took the Lewis (and) Clark expedition to explore the Louisiana Purchase."

The bronze monument will depict four members of the Lewis and Clark party, larger than life-size, standing on the Capitol campus between the Capitol and the Governor’s Mansion.

State Historical Society Executive Director Gary Kremer says Missourians should understand the significance of their journey after the three-year celebration of it. Kremer hopes the monument will spark more interest in reading and studying about the Lewis and Clark exploration of the West.