You are here: Home / Archives for tornadoes

From the Governor’s Office

Governor Mike Parson today activated the Missouri National Guard as the state continues to respond to damage from flooding, tornadoes, and severe storms — while still under the threat of additional flooding and severe storms this week.

Governor Parson said in a press release, “Missouri has been battling historic flooding since March, which is depleting local resources, and now flooding conditions in many parts of the state are only getting worse. In addition, communities from Carl Junction to Jefferson City are facing the challenge of recovering from tornadoes and severe storms, further challenging civilian resources. The Guard has demonstrated its capabilities in response to natural disasters across Missouri, and I know they’ll make a difference at this critical time.”

Guard units will be deployed to support Chariton County, by sandbagging to reinforce a stressed levee near Brunswick. The Guard will also be staging and utilizing high-water vehicles to support flood response operations in Jefferson City.

Governor Parson says additional severe storms are possible for parts of Missouri on Memorial Day, and there is an elevated risk of potentially damaging severe storms for much of the state on Tuesday, May 28. 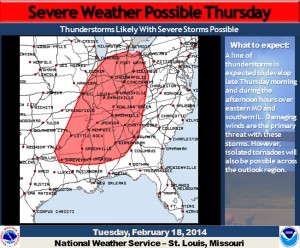 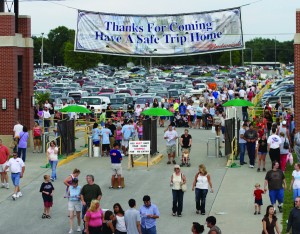 Reductions in funding have caused the National Weather Service to scale back the number of severe weather spotter classes it is offering. In northwest Missouri, the number of talks has been cut in half. 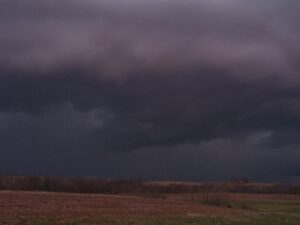 Spotter training classes help people know how to interpret storm features, such as this wall cloud. Images courtesy of the National Weather Service.

Andy Bailey is the Warning Coordination Meteorologist for NWS’s Pleasant Hill office. “Where as in the past we would do forty-five to fifty training sessions per season, this year we’re looking at about twenty-five.”

Bailey explains, the spotter schedule has been adjusted so the Service can get the most “bang for its buck.”

“For some of the rural areas, we’re working to do spotter training at one location per county every other year. In urban areas, where population is higher, we need to do it every year. We also do it every year in locations that are a little bit further away from our radar.” Bailey says that is because basic radar limitations mean the Service needs more eyes in those areas. “Places like around the Kirksville area, for instance, we’ll do spotter training there every year.”

Bailey hopes interested individuals will take advantage of any chance they have to take the training.

The classes teach attendees how storms form, why certain types of severe weather develops and where to look in a storm to see if certain phenomena are developing, such as a tornado.

Bailey says it can take a while to sink in. “After just one training course they’re probably still a little bit fuzzy but if they come back every year or two to get training and they go out spotting quite a bit, they really get to be very skilled at identifying that weather.”