You are here: Home / Archives for Tony La Russa 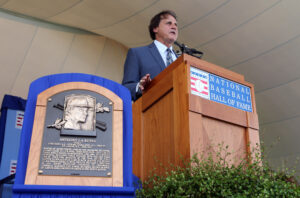 Former Cardinal managers Tony LaRussa and Joe Torre joined Bobby Cox along with players Greg Maddux, Tom Glavine and Frank Thomas in Cooperstown for their induction into Baseball’s Hall of Fame on Sunday.

If you’re under the age of 30, you’ll know Torre as the New York Yankees manager during their dominating run in the 90’s.  However, what you may not know about Torre, is that he had his best playing years in St. Louis where he spent six of his 18 seasons, playing third and first and doing a little catching.

In those six season with the Cardinals, Torre hit .308 and drove in 558 RBIs. In his other 12 seasons with the Mets and Atlanta, Torre drove in another 627 runs…the Cardinals had him in his prime. As the manager of the Yankees, he won his first of four world series and six pennants in 1996, the year after he was fired from the Cardinals.

That’s right, Torre also managed in St. Louis, (after stints with the Mets and Braves),  where his record was three games under .500 in a span from 1990 to 1995. Torre was fired early in the ’95 season and it was Tony La Russa who took over at the start of the 1996 season with the Cardinals and won the division. He’d go onto to win 1,408 games with the Cardinals, two world series title and three pennants. He also took the Oakland A’s to three World Series in a row, winning in 1989.

During their speeches, both Torre and La Russa took time to talk about the influence that George Kissel had on their lives in baseball.  Kissel spent nearly 70 years in the Cardinals organization as a minor league manager, coach, scout and third base coach on the major league level.

Kissell earned the nickname “the Professor,” and his influence on the game in St. Louis is highly regarded as being one of the key factors in what is known as the “Cardinal Way.”

Former Cardinals manager Tony La Russa has talked to Major League Baseball’s Commissioner Bud Selig about working in the league. While La Russa didn’t give details, he will not be taking over Joe Torre’s job as executive VP of baseball operations.  Details are still being worked out.  La Russa couldn’t stay away from the field very long. On Tuesday, he visited with good friend Jim Leyland of the Detroit Tigers.