A Missouri House committee will hear testimony Monday evening in Jefferson City on a proposed House resolution that declares that the House has no faith in presidential election results from six key states. 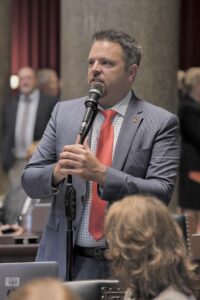 “Many of my constituents through all forms of media reached out to me, asking me to do something. And it’s not just me, it’s all representatives throughout the state,” Hill says.

State Rep. Rasheen Aldridge, D-St. Louis, is critical of Hill’s resolution, saying President Trump lost the election. Aldridge describes Hill’s resolution as meaningless, and says it “will do nothing of substance.” In a statement, Aldridge says Missourians want lawmakers to come together to work on issues like COVID.

The resolution says that if a full and fair investigation isn’t done, Congress should refuse to accept the electoral votes from those six states.

“We’re seeing in key states where we have razor-thin margins, lots of evidence of fraud, and most of it is not being investigated. So, we as a state have to make a statement,” says Hill.

Hill’s three-page resolution alleges that 50,000 votes held on USB cards are missing in one Pennsylvania county, and that more than 20,000 nonresidents cast ballots in Georgia. It also says that absentee ballot and mail-in ballot laws passed in the six states were likely ignored and violated.

The House Special Committee on Government Oversight will hold Monday’s hearing at 5 p.m.

Representative Merideth says Schmitt’s recent decision is directly relevant to the resolution that will be heard on Monday.

“To be clear, you did not simply join in the Texas federal litigation. You led a group of 17 attorneys general in backing Texas Attorney General Ken Paxton’s baseless legal theories,” Merideth writes, in part.

Merideth also says there is no evidence of alleged widespread election fraud.

If the oversight committee approves Hill’s symbolic resolution, it would then head to the Missouri House floor for debate this month.