You are here: Home / Archives for Terrorism

A Kansas City man has pleaded guilty in federal court to sending money to al Qaeda.

Kansas City federal prosecutor Beth Phillips says 32-year-old Khalid Ouzzani, a used car and auto parts dealer, is a Moroccan-born naturalized citizen who admits to sending $23,500 to the terrorist organization in late 2007. Phillips says Ouzzani also admitted in court that he had sworn an oath of allegiance to al Qaeda and intended to join. Prosecutors also charge Ouzzani with attempting to persuade others to fight for al Qaeda in Afghanistan, Iraq and Somalia.

A grand jury has indicted Ouzzani on 33 felony counts, including bank fraud, money laundering and interstate fraud while operating Truman Used Auto Parts. He also is charged with Medicaid and food stamp fraud.

“I want to assure the public that at no point prior to his arrest was Ouzzani any threat of causing imminent harm or danger to the citizens of our community,” Phillips says.

Thanksgiving for many Missourians is being celebrated in Afghanistan, Iraq or even in Germany, where troops are being treated for injuries suffered in combat.

A Missouri soldier and Congressman in Germany on this Thanksgiving have talked with the Missourinet. END_OF_DOCUMENT_TOKEN_TO_BE_REPLACED

Missouri’s two U.S. Senators express concerns about the decision to have some of the Guantanamo detainees tried for terrorism in the United States. But only one says it’s the wrong thing to do.

Senator Christopher “Kit” Bond (R-MO) believes Khalid Sheikh Mohammed and others detained at Gitmo are not run of the mill criminals and should not be brought to the U.S. mainland for trial.

“These are illegal combatants in a war on terror that’s been called on us,” said Bond in his weekly telephone conference call with Missouri radio reporters. “They don’t deserve the constitutional protections that we afford American citizens or people who are lawfully in this country.” END_OF_DOCUMENT_TOKEN_TO_BE_REPLACED 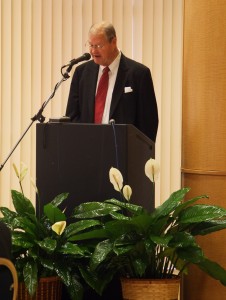 West-Central Missouri Congressman Ike Skelton said today is a day not only to honor military veterans, but to be thankful for those currently serving in the military.

“To the veterans of yesteryear, we offer our thanks and enduring gratitude. But today we should also honor those who currently serve in America’s military, the men and women who will be the veterans of tomorrow. We have a solemn duty to respect and show appreciation to our forces and their families for their sacrifices and willingness to serve.” END_OF_DOCUMENT_TOKEN_TO_BE_REPLACED

A special commission sees biological warfare as a real threat to American security and a Missourian who is a leader of that commission worries the country isn’t taking the threat seriously.

Former Senator Jim Talent serves as vice chairman of the bipartisan Commission on the Prevention of Weapons of Mass Destruction Proliferation and Terrorism, charged by Congress to assess the threat of WMDs being used against the United States.

END_OF_DOCUMENT_TOKEN_TO_BE_REPLACED

West-Central Missouri Congressman Ike Skelton has written President Obama, urging him to listen to his military commander in Afghanistan and give him the resources he needs to win.

In a six-page letter , Congressman Skelton, chairman of the U.S. House Armed Services Committee, outlines the case for the importance of the war in Afghanistan and urges President Obama to support General Stanley McChrystal, by giving him the troops and equipment he needs. Skelton states in the letter that McChrystal has the right plan and is the right man for the job.

Is Skelton worried that the president’s resolve in Afghanistan has wavered?

"I hope not," Skelton tells the Missourinet, "I certainly hope not. I do know exactly what he said back in his March speech and I’m taking him at his word for that."

Skelton states in the letter that al Qaeda presents "a serious threat to American national security." He says al Qaeda, sheltered in Afghanistan by the Taliban, must be defeated. He writes that he doesn’t believe America can successfully root out al Qaeda from Pakistan and destroy the organization if it doesn’t succeed in Afghanistan.

Skelton says America must regain its footing in the treacherous terrain of Afghanistan.

"We had the initiative early on, but going into Iraq caused us to short change the efforts in Afghanistan," Skelton says. "Consequently, that initiative has been slowed down."

Skelton counsels for a very tough stance against the Taliban. He points out the Taliban has become experts on exploiting "every ideological and military success and it should not be our policy to allow them even the smallest victory."

A three-prong approach is outlined in the letter. Skelton advocates a counter-terror campaign using pilotless drones and special operations forces to attack al Qaeda leadership. Secondly, he says the United States must speed up the training of Afghan National Security Forces, though he says such a strategy on its own is insufficient. The final approach would be the United States-led counter-insurgency plan devised by General McChrystal. Skelton tells President Obama that plan must be given sufficient resources so that the U.S. and allied military, along with civilian experts, can carry out the strategy Obama announced in March.

"Undertaking a counter-insurgency campaign is complex, and it will require additional resources, both civilian and military, and hopefully not all from the United States," Skelton writes.

Toward the end of the letter, Skelton states, "We know the ends, General McChrystal has a plan, and we should supply him the resources he needs to see if it will work."

A three-judge panel of the 9th U.S. Circuit Court of Appeals has criticized the administration of former President George W. Bush over the practice of detaining suspected terrorists without filing charges against the individuals.

This could mean former Attorney General and Missouri Governor John Ashcroft might face personal liability for the decisions. A lawsuit against Ashcroft and other officials was filed in 2005 by Abdulla Al-Kidd, an American citizen who was born Livoni Kidd in Kansas, and who converted to Islam.

He was arrested in 2003 while waiting for a flight to Saudi Arabia, and was held for 16 days as a material witness to a crime. He was never charged.

Ashcroft has maintained he is immune from such legal action. The U.S. Justice Department says it is reviewing the decision.

The Third Annual Conference on Coordinated School and College Safety and Security is sponsored by the Missouri School Boards’ Association . MSBA Chief Communications Officer Brent Ghan says that while most educators and emergency responders believe our schools and colleges are safe there is a need to be prepared for anything that might happen.

"The message that we have at these conferences is," according to Ghan. "Even though the odds of a particular incident happening at your school building or your college campus are relatively small you still need to be prepared, you still need to develop plans for how you would handle emergency situations involving safety."

The best plans in the world are of no value if they are not studied and practiced by those who must be in the know in the event of disaster.

"It’s absolutely critical that the classroom teacher understand exactly what to do in the case of a school safety incident," said Ghan. "And how to handle the kids, how to keep them calm in a situation, and just how to react properly."

The preparation of the classroom teacher is critical in so many emergency situations.

"What we want to emphasize is that the classroom teacher needs to be very familiar with those plans," said Ghan. "Not just the building principal and not just administrators."

Preparedness advice will not be limited to natural disasters, fires, and the like. Among the presenters will be an expert on terrorism research and response.

The U.S. Senate voted 90-6 to deny funding for President Barack Obama’s plan to close the prison at Guantanamo Bay in Cuba, following the lead of the U.S. House of Representatives. Both Senator Christopher “Kit” Bond (R-MO) and Senator Claire McCaskill (D-MO) voted with the majority.

President Obama had made it campaign promise to shut down Gitmo, but concerns had been expressed that closing facility and bringing the 240 detainees to the United States mainland could pose a national security threat. Senator McCaskill says Democatic Party denial of funding should not be viewed as support for keeping open the prison.

Senator Bond doesn’t want the detainees returned to the United States, and believes many of the Democratic Capitol Hill lawmakers heard from the folks back home that bringing these individuals into the U.S. goes against the will of the American people.

“They either saw the light or felt the heat and I think they felt the heat,” said Bond. “Because this is not a political issue, it’s an American issue.”

McCaskill says if the detainees are brought to the United States, this country could certainly deal with that reality.

“I’m not saying that we should bring them to Missouri,” said McCaskill. “I’m saying that in our country we keep bad guys locked up safely.”

Bond feels there is no need to shut down the prison at Guantanamo, and hopes the President comes to realize that.

Negotiations have been underway in an effort to convince European nations to accept some of the detainees, but that effort is not yet bearing fruit.

America will soon send between 20,000 and 30,000 more troops to Afghanistan, a move applauded by West-Central Missouri Congressman Ike Skelton .

To Congressman Skelton, chairman of the House Armed Services Committee, this move is overdue.

"Yes, I’ve been quite concerned and, frankly, worried about Afghanistan getting out of hand," Skelton tells the Missourinet, "It is, afterall, the genesis of the attack on 9/11 and those people are still there and are very, very anxious to do something bad to the United States to to our population."

The announcement of the increased troop strength came from the Chairman of the Joint Chiefs of Staff, Admiral Mike Mullen. Mullen has said the additional troops will be on the ground in Afghanistan by summer.

We asked Skelton what might have prompted Mullen to make that decision.

"Reality," says Skelton, "the fact that we’re in trouble there and that things could get worse immediately causes us to have to put more troops there now."

Skelton says he hopes NATO will follow suit and increase its troop strength in Afghanistan, which he says is critical not just to the United States, but to the entire free world.