You are here: Home / Archives for Surprise billing legislation

A Missouri lawmaker who serves on the House health committee is calling on the U.S. Senate to approve bipartisan “surprise billing” legislation. 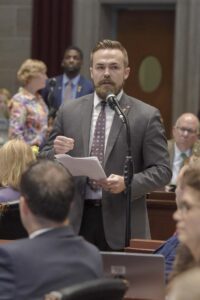 He tells Missourinet that insured patients shouldn’t have to worry about unexpected bills after receiving care.

“Surprise billing occurs when you go receive treatment of any kind and you believe that you’re in-network facility using in-network providers, but as you find out after the fact, whether it was a physician, a lab, a technician, one of those were outside of your insurer’s network,” Schroer says.

“I guarantee you there are thousands upon thousands of not only Missourians but Americans out there that are seeing this occur,” says Schroer.

The bill has at least three Democratic and three GOP co-sponsors, and has support from more than 20 U.S. senators in both parties.

U.S. Sen. Tom Carper, D-Delaware, says four in ten Americans receive medical bills that they didn’t plan for. He says the surprise bills can run more than $100,000, adding that “no American should have to file bankruptcy or face financial difficulty” for a serious ailment or an emergency room visit.

The “STOP Surprise Medical Bills Act” also includes dispute resolution, requiring providers and insurers to come to the negotiating table when there is a difference of opinion over pricing. U.S. Sen. Michael Bennet, D-Colorado, another co-sponsor, says patients deserve to know how much they’re paying for health care services at the point of care.

Click here to listen to the full interview between Missourinet’s Brian Hauswirth and State Rep. Nick Schroer, R-O’Fallon, which was recorded on November 14, 2019: