You are here: Home / Archives for Stoddard County

The Revenue Department has offered an explanation for its license offices scanning personal information from concealed carry permit applicants. 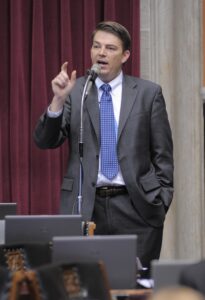 Representative Todd Richardson has filed a bill meant to clarify and strengthen Missouri laws on the retention or dissemination by the Revenue Department of personal information from license applicants. (photo courtesy; Tim Bommel, Missouri House Communications)

A lawsuit was filed in Stoddard County over its license office scanning those documents. A judge then granted an order putting a temporary halt to those scans. Some GOP lawmakers say the scans alone violate state law, and some allege information is being sent to the U.S. Department of Homeland Security.

The issue has been raised to Revenue Department Deputy Director John Mollenkamp at a hearing of the House Budget Committee. St. Louis Post-Dispatch reporter Elizabeth Crisp tweeted some of his remarks on the matter.

Mollenkamp says more details will be released at Monday’s hearing.

Representative Todd Richardson (R-Poplar Bluff) has filed a bill to prohibit the Department from keeping copies of such documents, but he says it’s not clear yet what change needs to be made in law.

“Whether there exists a gap in the law that we need to fix is really the point of my legislation. Privacy rights are an incredibly important right that we have as Missourians and I don’t want a state department unnecessarily collecting people’s private information, and I certainly don’t want them collecting that private information and shipping it off to an out-of-state, for-profit company.”

Representative Casey Guernsey (R-Bethany) says an anonymous source working with a Revenue Department license office in his district has told him the information is going to the Department of Homeland Security. He says he thinks that state law is “plenty clear” in prohibiting the scans, and any dissemination to the federal government.

“In 2009 I was in the legislature and we passed [a law] specific to these situations … it is abundantly obvious the intent of the legislation, not to mention the language that we put in statute to prevent this sort of thing from happening.”

See our earlier stories on the scanning of concealed carry application documents.

A lawsuit was filed Monday morning that says a Bootheel license office is violating a state law by collecting information from concealed carry permit applicants.

Stoddard County Prosecutor Russell Oliver say his county’s license office is requiring concealed carry permit applicants to turn over documents with their applications, to be scanned. He says that’s a violation of state law.

“State statute … prevents the collection of any personal information by the Department or Revenue or their fee office agents.”

Oliver filed the suit not as Prosecutor by as an attorney representing a private citizen, Eric Griffin, who tried to get his concealed carry permit yesterday morning.

“My client went in to the local fee office to apply. They informed him that his documents would have to be scanned. He said he didn’t want to do that and they said, ‘Well, you can’t get your CCW,’ so this is clearly a hurdle that someone has to overcome to obtain a concealed carry endorsement on their driver’s license.”

Oliver says he thinks the fee office is asking for those documents to comply with the federal Real ID Act of 2005, which Missouri opted out of.

The suit asked for, and a judge has signed, a temporary restraining order stopping the license office from collecting concealed carry permit application information.

Oliver doesn’t know why the information is being collected or who it is being made available to, but says legally it shouldn’t be scanned in the first place.

“Statute clearly makes the application itself a personal, protected, private information. It is being uploaded to at least one third party, this private company [that provided the equipment] and from there we don’t know where it’s going.”

A spokesman for the Department of Revenue declined to comment on the suit, and said the Department’s operations are “not inconsistent with the statutory protocols.”

The number of tornadoes in Missouri in 2012 was below average, but the number of people killed by them was not. 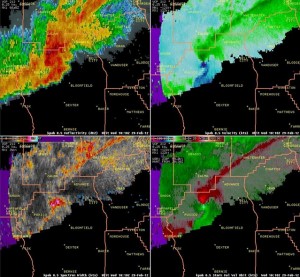 The strongest tornado to hit Missouri in 2012 occurred the morning of February 29 and killed one person in Stoddard County. It registered an EF-3 on the enhanced Fujita scale, with winds estimated between 136 and 165 miles per hour. (Image courtesy; National Weather Service.)

Preliminary data say Missouri had 28 tornadoes in 2012 that killed 6 people and injured 70. That’s below the average of 32 tornadoes a year going back to 1950, but nearly right on average for casualties.

Warning Coordination Meteorologist Jim Kramper says the unusually warm and dry weather last year had a lot to do with the number of tornadoes being down.

“2012 was a record-setting year in terms of warmth.  We had a very warm spring and as such … late winter and spring was our most active time of the year. February lead the way, believe it or not, with 13 tornadoes in February followed by March with 2 and then April had 5. Then after that it really slacked off. Very slow numbers in May, virtually nothing in June as well … (in 2012) everything was very early in the year.”

Kramper says it’s disappointing that tornado deaths were not down, especially in a below-average year for the number of twisters. He suspects too many people still think it won’t happen to them.

Of the 28 tornadoes in the state, most were relatively weak in terms of wind speed. The strongest was a single EF-3 tornado in southeast Missouri’s Stoddard County that killed one person.