You are here: Home / Archives for Steven Jackson

Initial reports favored the Atlanta Falcons in signing free agent running back Steven Jackson. Those rumors cooled over the last 24-36 hours with Green Bay appearing to be in the mix and the favorite. However, Jackson and the Falcons agreed to a three-year, $12 million deal Thursday afternoon. Jackson had 1,042 yards rushing and four touchdowns with the Rams last season. It was his eighth straight season with more than 1,000 yards rushing…all with St. Louis.

He reached out to Rams fans on Twitter thanking them for “believing in me & allowing me to be an integral part of this team for so many years.”

Watch as I discuss NFL free agency with Bill Scott of Wisconsin Radio Network.  By the way, thanks to Bill Scott for finding a nice screen shot of me in the middle of a blink! 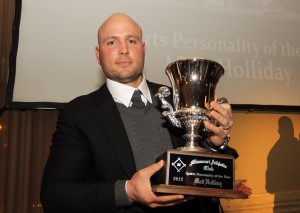 Matt Holliday proudly holds up his trophy after winning the 2012 Sports Personality of the Year Award at the Missouri Athletic Club. UPI/Bill Greenblatt

Holliday hit .295 with 102 RBIs and took over as the team’s number three hitter with the departure of Albert Pujols. Not only did Holliday replace Pujols in the lineup, but he also took the lead when it came to hosting Pujols’ charity golf tournament over the summer.

Bob Gibson was the first Cardinals to win the honor. Pujols, Chris Carpenter, Adam Wainwright and Lance Berkman (last year) were all teammates of Holliday to win the award.

Jackson received the Jack Buck Award for his “dedicated support of sports in St. Louis.” Jackson is rushing toward his eighth consecutive 1,000-yard season and 10,000 career rushing yards.

The Sports Personality of the Year award is decided upon in a vote of the MAC’s 2,600 members. Each year, members receive a ballot of suggesting candidates. There is only one rule, and it’s one that Buck insisted upon: The award must go to someone new every year.