You are here: Home / Archives for Stem Cell Research

A House Democrat has filed an amendment to the state budget that would bar the use of Department of Corrections funds for abortion, cloning or stem cell research.

Representative Keith English’s (D-Florrisant) proposal would add to the budget bill for the Department of Corrections language that would prevent the use of funds from that bill for any “intentional life-ending medical procedure including, but not limited to, abortion, cloning or stem cell research.” It would also require that funds in that budget bill be subject to the same statutory provisions and definitions that govern funds going to the Life Sciences Research Board.

The U.S. Circuit Court of Appeals in St. Louis declared unconstitutional in 2008 a Corrections Department’s policy that prohibited transportation of inmates to clinics for abortions that are not medically necessary. English says his amendment would also prevent such transportation to be funded.

He wants the money that would be used for inmate abortions go to sheltered workshops.

The House is anticipated to begin debate if the proposed budget for Fiscal Year 2015 Tuesday. Amendments such as that filed by English may or may not be offered during that debate.

The budget bill for Corrections is HB 2009.

The House has given first round approval to legislation meant to allow medical workers in Missouri refuse to participate in certain procedures including abortion, human cloning and stem cell research if they have a religious or moral objection to them. 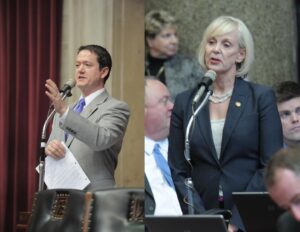 House Speaker Tim Jones (R-Eureka) says his bill has been tightened up from previous years to define what it means not to participate, to specify what medical professionals it would apply to and what procedures those professionals could decline to provide.

The chamber voted 116-38 to move the bill one step closer to going to the Senate where it failed last year. 10 House Democrats voted with Republicans to advance the proposal, with one Republican voting against it.

Democrats speaking against the bill said it would allow the government to interfere in the decisions of women regarding their healthcare. Representative Stacey Newman (D-St. Louis) told a colleague, “To be clear, this is just one more vagina-specific bill in an election year that is designed to hurt women.”

“This is not a women-only bill. This is a human kind bill, because the procedures talk about human cloning. Well, that can be men or women. Human embryonic stem cell research … men or women; humans. Human somatic cell nuclear transfer, fetal tissue research: those issues involve men and women. They involve people. They involve children yet to be here.”

One more favorable vote would send the legislation to the Senate.

The House has approved a proposal its sponsor says will let medical workers refuse to participate in certain procedures if they have a religious objection.

Several House Democrats spoke against the legislation, saying it is an attack on women’s reproductive rights. Representative Stacey Newman (D-St. Louis) says the original bill allowed medical workers to opt out of any medical procedure, but the scope was narrowed. “We’re talking about only those procedures that are unique to women’s reproductive health.”

Majority Floor Leader Tim Jones (R-Eureka) sponsored the bill. He defends it, and his motives. “This bill has to do with protecting the religious liberties of workers, of employees and individuals. A bedrock principle upon which this nation was founded.”

Some Democrats tied the issue to the debate in Washington D.C. over religiously based institutions providing contraception to employees, but Jones maintained the bill was not about that. “I was working on this bill last November because of a situation that occurred in two different hospitals involving a group of female nurses who were forced to participate in an abortion procedure. They said they didn’t want to do that and they were terminated.”

Fourteen House Democrats voted with Republicans in passing the measure, 113-41. It now goes to the Senate for consideration.

A judge in Jefferson City has dismissed a lawsuit filed by a group known as the Missouri Roundtable for Life which is attempting to prevent taxpayer dollars from being spent on certain forms of stem cell research.

In essence, Cole County Circuit Judge Richard Callahan has issued what attorney Steve Clark, one of the lawyers representing the plaintiffs, calls a procedural ruling. "The judge avoided getting to the merits of these issues," says Clark. "Avoided ruling on the true issues in the case, by saying that there is no controversy between the taxpayers that filed the suit – the Missouri Roundtable for Life and Fred Sauer – and the Life Sciences Research Trust Board and the State Treasurer."

At issue is a $21-million payment to the Board, which distributes the money as it sees fit. Part of what the plaintiffs argue is money could be spent on forms of research protected under Amendment 2 – the so-called stem cell research amendment of 2006. Much of that research is believed by opponents to be tantamount to human cloning.

An appeal is being launched. Clark says another option for the plaintiffs is to launch legal action against any party that receives any of this taxpayer money.

A judge in Jefferson City has denied a request for a temporary restraining order to stop public funds being used by the Life Sciences Trust Fund. Attorney Ed Martin, who represents the Missouri Roundtable for Life, claims the Trust Fund might soon spend public dollars to fund abortion, cloning, and human experimentation because of the wording of the Stem Cell Initiative - Amendment 2 - which was approved in 2006.

Martin adds the Trust Fund or any other entity that benefits from voter approval of Amendment 2 has an expectation of funding without decreases.

Chief Deputy Attorney General Karen Mitchell, representing the state, argued the Stem Cell Amendment does not guarantee money down the road – there is no expectation of funding. She added there is no money being transferred from the State Treasurer’s Office to the Trust Fund until 2009, so there was no need for a temporary restraining order.

A trial on the merits of the plaintiffs’ arguments – which deals in part with whether there is a conflict between state law regarding abortion money and approval of Amendment 2 – will be held August 1st in Cole County Circuit Court.

The legal challenge to Secretary of State Robin Carnahan’s summary wording of an initiative to limit certain forms of stem cell research in Missouri has its day in court – but there could be more such days.

Attorney Eddie Greim, representing the plaintiffs led by the group Cures Without Cloning , argued before Cole County Circuit Judge Patricia Joyce that the summary is not an honest attempt to let voters know what a yes vote or a no vote would mean. He adds the signature collectors would have to spend a lot of extra time by having to explain to voters why the wording on the summary is so vastly different from the goal of the plaintiffs.

Assistant Attorney General Karen Mitchell, representing the state, argued the ballot summary is just that – a summary – and is not intended to tell all about an initiative. Mitchell insists the summary language is sufficient and fair.

The judge expects to have a ruling on at least part of the challenge by the middle of the month. If more arguments are needed, a February 20th court date has been set aside.

Secretary of State Robin Carnahan defends the summary her staff wrote for the anti-cloning initiative petition supporters want to circulate in Missouri. The group pushing the change, Cures Without Cloning, has called the language misleading and confusing. It accuses Carnahan of playing partisan politics with the issue.

Carnahan stands by the language. She says her staff has met its constitutional duty to explain in summary form what the initiative petition would do if approved by voters. Carnahan says the criticism from Cures Without Cloning is nothing new. She says her office is often criticized for summary and ballot languages by groups that want the language slanted in their favor.

Carnahan rejects suggestions that a $25,000 campaign donation from Supporters of Health Research and Treatments had anything to do with her staff’s writing of the language. She says lawyers in the office carefully reviewed the summary before it was approved. Carnahan says her job is to follow the law, which she insists her office did in this case.

Attorneys representing the group Cures Without Cloning in its legal challenge to Secretary of State Robin Carnahan’s wording of the group’s petition initiative to ban certain forms of stem cell research explain their actions.

Attorney Eddie Greim says part of the challenge is being made under Missouri’s constitution, with the claim that the wording summary does not adequately and competently summarize what the initiative does – ban forms of stem cell research the plaintiffs consider human cloning. He adds Secretary’s statement is unfair because it patently reflects her "bias and prejudice against the Cures Without Cloning Amendment."

Greim says this is a case of a state official using the authority of the office to violate the constitutional rights of citizens. A statement from the Secretary of State’s Office says the summary wording is "fair, accurate, and reflects how the constitution would be changed by this initiative if it got on the ballot and was passed."

Two lawsuits have been filed over the ballot summary for a proposed initiative to ban certain forms of stem cell research.

Supporters of the initiative have filed suit in Cole County Circuit Court over Secretary of State Robin Carnahan’s wording of the summary. They say that while their goal is to ban all forms of stem cell research they consider to be human cloning, the wording is confusing and misleading, and might lead Missourians to believe the proposal would expand human cloning.

The other suit has been filed in the same court by opponents of the initiative. They claim the ballot measure’s financial estimate prepared by State Auditor Susan Montee understates the potential cost to taxpayers.

A group involved in last year’s effort to defeat a Constitutional amendment involving stem cell research is making known its feelings over the wording of an initiative proposal to limit certain forms of that research. Jaci Winship of Missourians Against Human Cloning says the final wording on the ballot question proposed by the group Cures Without Cloning is misleading and confusing, and she blames Secretary of State Robin Carnahan for that.

"She has a long history of abusing her office by writing politically-motivated, inaccurate and grossly misleading ballot questions," says Winship. "However," continues Winship, "The ballot question she recently certified for the Missouri Cures Against Cloning initiative, goes beyond anything she has ever done before. This reaches a new low."

Winship also accuses Carnahan of selling herself for $25,000 – the amount of contribution dollars received from what Winship calls a "pro-human cloning group."

Ryan Hobart with the Secretary of State’s office flatly rejects any suggestion Carnahan has been "bought." "That is a false statement," says Hobart. "Our obligation is to Missouri voters, not to one interest group or another."

The Secretary of State’s Office has released a statement reiterating its position regarding elections and ballot initiatives. It reads: "It is our legal obligation to make sure that Missouri voters always have a fair, accurate, and concise summary of what they are voting on – regardless of the issue. The summary statement for the petition to limit stem cell research is fair, accurate, and reflects how the constitution would be changed by this initiative if it got on the ballot and was passed."

The petition sponsor, Cures Without Cloning, has until Monday to decide whether to launch legal action challenging the wording. It would do so in Cole County Circuit Court in Jefferson City.