You are here: Home / Archives for State Sen. Karla Eslinger 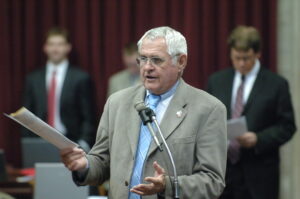 An obituary from Clinkingbeard Funeral Homes says Mr. Wallace died suddenly at his home on Sunday. He was 77.

The Thornfield Republican served in the Missouri House for eight years, from 2003-2010. He chaired the powerful Missouri House Elementary and Secondary Education Committee during his final two years.

“He would find an opportunity for folks to understand that we have some really good schools out there,” Eslinger says. “He was very proud of the work of the schools in his (southern Missouri) district, and so he was able to share those success stories to folks who may not have that perception of public education.”

She tells Missourinet that Wallace was a statesman.

Senator Eslinger also describes him as a devoted husband, grandfather and a man of faith.

Former State Sens. David Sater, R-Cassville, and Mike Cunningham, R-Rogersville, were among the many former and current lawmakers who attended the funeral.