You are here: Home / Archives for State Sen.-Elect Holly Rehder

A veteran southeast Missouri lawmaker who is heading to the Senate in January has filed prescription drug monitoring program (PDMP) legislation for the ninth consecutive year. 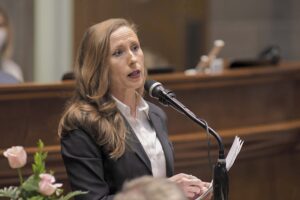 State Sen.-Elect Holly Rehder, R-Scott City, has filed a compromise bill that she says had the support of the majority of Senate and House members in 2020.

“Just the main PDMP bill with that compromise on the board that directs the database,” Rehder says.

A PDMP is an electronic database that collects data on controlled substance prescriptions within a state.

While both the Missouri House and Senate approved PDMP this spring, they passed different versions. Missouri is the only state in the nation without a PDMP.

As for Representative Rehder, she’s urged the Legislature not to judge people “unless you’ve walked a mile in their moccasins.” During an emotional May House floor speech, Rehder revealed to colleagues that her late mother and late sister were both sexually assaulted multiple times, and turned to prescription drugs for their pain.

She says she’s thankful that God has given her the ability to fight for those who can’t fight for themselves. Rehder also says Missouri’s medical professionals must have the knowledge of what their patients are on, prior to prescribing more medication.

“The more that the public gets involved, the more that those who are dealing with this epidemic reach out to their representatives and senators, tell their stories, that’s what moves the needle,” Rehder says.

December 1 is the first day that Missouri lawmakers can pre-file legislation for the 2021 session, which begins January 6 in Jefferson City.

Click here to listen to the full interview between Missourinet’s Brian Hauswirth and State Rep. Holly Rehder, R-Scott City, which was recorded on December 1, 2020: