You are here: Home / Archives for State Rep. Wes Rogers 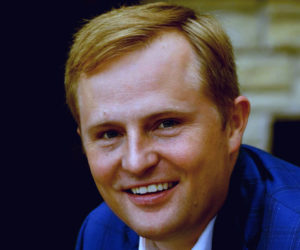 Clay County Representative Wes Rogers, D-District 18, has been trying to apply for an SBA disaster loan online since Tuesday.

The coronavirus has immediately damaged his fulltime job, his family’s business selling commercial dishwashers to the hospitality industry and nursing homes.  Johnson laid off most of his 20 employees so that they could get unemployment benefits.

Rogers says he is “appalled” at what he calls a lack of planning for helping businesses being shut down.

“We need to take this pandemic incredibly seriously, that said the government should have had an economic plan for when we need to shut things down,” he told Missourinet. “There’s been very little in terms of support for small businesses, I think it’s getting better now that they realize how much harm has been caused.”

The Small Business Administration now offers disaster loans to Missouri businesses, but the many are struggling with the web portal to submit, including Rogers.  He says he’s been sharing information with constituents.

“The most frustrating part of this whole thing is that the web site is timing out and the government was not prepared for a mass rush on loans like this. I have no sympathy or understanding for how the government would plan without expecting high volumes on the web site. I’m doing what I can to help people while at the same time being frankly critical of the government’s response with this.”

Rogers tells constituents that even when the loans go smoothly and money moves quickly, “it’s the tip of the iceberg as far as true stimulus to get us back on track.”

These loans are capped at 3.75 percent interest and 2.75 percent for nonprofits over 36 months, with even better loan terms in some cases.

Missourinet found some helpful information about filing for an SBA disaster loan from The Loop Community Improvement District website http://theloopcomo.com,  The Loop is based out of Columbia, but provides regular public updates.

Keep trying the online system and they recommend you:

Online submissions are still recommended because you will receive a confirmation of the application and be assigned an application number that will allow you to sign in to the system to get real-time status updates on the application.

Although it is still recommended that applicants keep trying to apply through the SBA Disaster loan portal, this may not be possible for some due to the high volume of traffic.  You can also print the paper forms and mail them in or upload them electronically.

Here’s a link to the forms:
https://disasterloan.sba.gov/ela/Information/PaperForms

Other  instructions for filling out the application available to download.

A bipartisan group of lawmakers on the Missouri House Budget Committee teamed up this week to support a GOP amendment, which removes the restriction to once-daily Amtrak passenger service across Missouri. 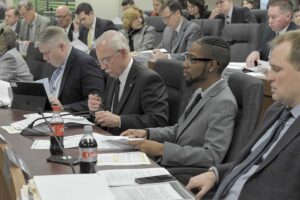 “I’ve used the Amtrak quite often, and I know how essential it is not just to me but to people that are trying to see our great state,” Aldridge says. “If it’s getting to Kansas City, Jefferson City, other stops that people like to visit.”

Representative Aldridge tells colleagues that both the morning and afternoon Amtrak trains are usually 90 percent full when he rides, and emphasizes the service’s need.

The train stops in downtown St. Louis, near 14th Street. It also stops in several Missouri towns, including Sedalia, Warrensburg and Hermann.

The Budget Committee has voted 19-16 to approve the Griesheimer amendment, which is aimed at preserving twice-daily service from St. Louis to Kansas City.

“When we visit my in-laws in St. Louis, we like to get on the train in Kirkwood (a St. Louis suburb), take it to your district, spend the day and get back on the train and then go home. It’s my son’s favorite thing to do. Without your amendment, would that be impossible?” Rogers asks.

The Amtrak issue could come up again on the House floor, when the full Missouri House begins budget debate. It’s unclear now when that will be, due to coronavirus concerns.

The state owes Amtrak more than $6 million in unpaid bills. 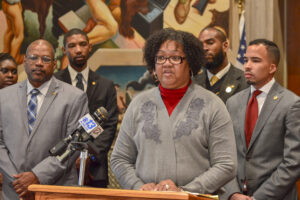