You are here: Home / Archives for State Rep. LaKeySha Bosley 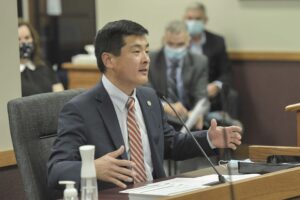 The House has voted for initial approval of bipartisan legislation that is aimed at providing witness protection. The bill from State Rep. Jonathan Patterson, R-Lee’s Summit, will create a pretrial witness protection services fund, to be administered by the state Department of Public Safety (DPS) to law enforcement agencies. The money would be used to provide security to witnesses, potential witnesses and their immediate families in criminal proceedings or investigations.

The provision does not include funding. Missouri House Budget Committee Chairman Cody Smith, R-Carthage, tells lawmakers that if they approve the Patterson bill, Governor Parson will call another special session to fund the program.

State Rep. Deb Lavender, D-Kirkwood, offered an amendment that would ensure that funding is included for the witness protection bill. Budget chairman Smith spoke against the Lavender amendment, which was defeated 95-46 by the GOP-controlled House.

The Missouri House has also voted for initial approval of legislation that eliminates the residency requirements for St. Louis police officers, firefighters and EMS personnel, and has a three-year sunset clause.

State Rep. Ron Hicks, R-Dardenne Prairie, sponsors the bill. He emphasizes that he is a state representative, and must take care of the entire state.

State Rep. LaKeySha Bosley, D-St. Louis, urged House members to vote no, noting that St. Louis residents will be voting on residency requirements in November. Bosley notes that Hicks is from St. Charles County, and that St. Louis City state representatives are not carrying the bill.

State Rep. Maria Chappelle-Nadal, D-University City, switched her position and voted for the bill. She spoke on the Missouri House floor about Hazel Erby’s firing in St. Louis County, and notes that many of the appointees that St. Louis County Executive Sam Page wants to hire are from St. Louis City. She voted for the Hicks bill, because of that.

The Hicks bill says St. Louis Police cannot impose a residency requirement on their officers, more stringent than a one-hour response time. Aldridge proposed an amendment, changing that to 30 minutes. The Aldridge amendment was defeated on a voice vote.

St. Louis has had 172 homicides. Chief Hayden says six St. Louis police officers have been shot in the past few months, and that retired Police Captain Dorn was shot and killed in June.

The House did not take up the juvenile certification legislation, which is sponsored by Schroer.

The five crime bills are expected to be debated again on Tuesday. They require one more vote, for final House approval. 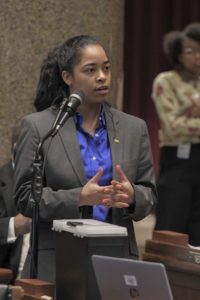 “And unfortunately I think he’s feeling some of the pressure that we feel,” Manlove says. “The General Assembly is in a (GOP) supermajority and that is apparently even hard for him to navigate.”

Republicans have a two-thirds majority in both chambers of the Legislature.

The Black Caucus met with the governor for about 40 minutes inside his Capitol office, while reporters and photographers waited outside in a Capitol hallway. Representative Manlove, the Black Caucus’ vice chair, says the governor is focusing on ways that they can move forward together.

“Tying back into that workforce development (issue) and how if a person has a good-paying job, that might deter them from some of this crime,” says Manlove.

Governor Parson opposes a September special session on gun violence, saying there are “many different opinions on how to find a solution.” He outlined a few possible solutions, during a news conference last week with Capitol reporters.

“I think you can partner up with the federal government, the city (St. Louis) and the county can do some things. I think on the state level, there’s things we can do, maybe put the (Missouri State) Highway Patrol, put them back in there on the ground. That’s things we can do right away,” Parson told reporters on August 28.

The Black Caucus supports legislation allowing cities with high gun violence to approve their own gun control legislation. Manlove tells Missourinet that children are still dying, noting there have been more than 100 Kansas City homicides in 2019.

She says gun violence is “ravaging our streets,” and notes Kansas City and St. Louis have consistently ranked in the top ten deadliest cities for at least a decade.