You are here: Home / Archives for State Rep. Jim Murphy

ST. LOUIS- A state lawmaker from eastern Missouri’s St. Charles County is calling for tougher penalties for violent crime and is also calling out the St. Louis Circuit Attorney’s office. 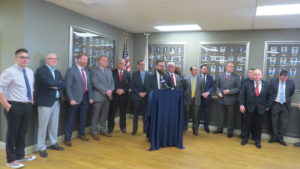 “These three bills are geared at combating violent crime in our state, protecting the men and women who put their lives on the line for the betterment of our citizenry, and ultimately, to make this state safer,” Schroer says.

One of the bills toughens penalties for armed criminal action.

“Felons in possession of firearms using those weapons to further commit more crimes will have to serve mandatory (prison) time under this bill. Moreover, armed criminal action under this legislation will become a dangerous felony, meaning they will have to serve 85 percent of their sentence. These dangerous felons have proven they have no regard for our laws and our Missourians,” Schroer says.

“This would allow law enforcement officers to turn over cases to the (Missouri) Attorney General’s office that the Circuit Attorney’s Office refuses to prosecute,” Schroer tells reporters.

“She’s not doing her job. She’s not the Circuit Attorney. She’s the circus attorney and she’s made a mockery of herself. She is a clown and people know it, and nobody cares what she thinks,” Roorda says.

Missourinet reached out to Circuit Attorney Gardner’s office, for reaction to the legislation and press conference comments.

“Public safety in our community, and communities around the state, is a key priority. Poverty and hopelessness fuel crime in our communities and we must address the root causes. In order to improve as a community, we must all work together. However, these issues must be addressed at a local level. The CAO (Circuit Attorney’s Office) continues to be committed to providing justice for all,” the St. Louis Circuit Attorney’s office statement reads.

Schroer’s third bill is House Bill 1889, which would create the Law Enforcement Officers’ Bill of Rights. It would require that any law enforcement officer who is suspended without pay, demoted, terminated, transferred or placed on a status resulting in economic loss is entitled to a full due process hearing.

Republicans and Democrats who serve on a Missouri House interim committee studying local taxation expressed concern about rising property taxes for senior citizens, during a Wednesday hearing in Jefferson City. 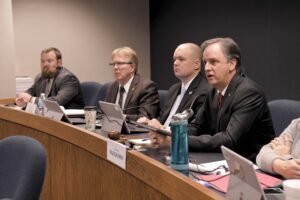 State Rep. Jered Taylor, R-Nixa, who serves on the House Special Interim Committee on Oversight of Local Taxation, also wants to protect those on fixed incomes.

“Even though you may buy a home, pay the loan off in 30 years, you still never own that home because if you don’t pay your (property) taxes, the state can come in or the county will come in and take your home,” Taylor tells committee members.

Taylor describes that as “thievery.” He says elderly residents have paid their homes off and that it’s difficult for them to pay their property taxes.

There is bipartisan support on the committee on the issue. State Rep. Barbara Washington, D-Kansas City, says it’s difficult for seniors in her district to pay increasing property taxes.

“We have to protect those people that are older so that they don’t lose their homes,” Washington tells the committee.

She also says abatement is an issue in her Jackson County district.

The committee held its final hearing of 2019 on Wednesday at the Statehouse. They also held four previous hearings during the interim.

Chairman Eggleston notes that the St. Louis City and Jackson County assessors are the only two assessors in Missouri that are not elected. He says state lawmakers “carved out” an exemption for them in 2010.

Eggleston supports making those two posts elected positions, saying the same rules should apply to all Missourians. He tells Missourinet he’ll file legislation in January, to try to put the issue on the statewide ballot. Eggleston says that, if lawmakers approve it, the measure would go to a statewide vote, because it would change the state Constitution.

“So I’m looking to put forward an HJR (House Joint Resolution) to put it back on the ballot to include those two assessors as well,” Eggleston says.

If state lawmakers approve the measure, it would be placed on the August or November 2020 statewide ballot.

Chairman Eggleston also delivered a presentation to the committee Wednesday about Wayfair, which involves an internet use tax.

Click here to listen to Brian Hauswirth’s full interview with House Special Interim Committee on Oversight of Local Taxation Chairman J. Eggleston, R-Maysville, which was recorded on November 20, 2019 at the Statehouse in Jefferson City:

A dean of Missouri’s congressional delegation has filed legislation that would allow high crime cities to have stricter gun laws.

“In St. Louis and across this nation…we are faced with an ugly, obscene, inescapable truth…gun violence is a public health emergency. I’ve introduced H.R. 3435, the Local Public Health and Safety Protection Act, because like you, I’m tired of the violence. I’m tired of the excuses. And I’m tired of our state legislature being either unable, or just too frightened, to do something about gun violence – because they’re being held hostage by the NRA.” Clay adds.

State gun laws are often the same for low crime rural areas as they are for higher crime urban areas.  Clay’s legislation is an effort for cities such as St. Louis to tighten gun laws without the approval of state lawmakers.

State Rep. Jim Murphy, R-St. Louis County, is blasting the bill, tweeting that Democrats are using gun control laws “to cover up the fact that they fail to support police and fail to control crime.”

“I understand the relationship that folks all over the state have with guns, but what is best for Moberly, Missouri isn’t necessarily what’s best for St. Louis,” says Krewson.

St. Louis Police Chief John Hayden took to social media on Wednesday, saying 18 people have been shot in four days in the Gateway City. Chief Hayden says 89 people have been murdered in St. Louis this year, up from 83 during the same period in 2018.

Under Congressman Clay’s proposed legislation, which he coauthored with U.S. Rep. Robin Kelly (D-Illinois), states could not prohibit or restrict a local government from:

· Requiring background checks for firearms purchases;
· Restricting the ability to carry a firearm in public places. Restricting the quantity and type of ammunition that an individual is allowed to purchase;
· Requiring gun owners to safely store their firearms, especially in households with children;
· And prohibiting the sale and transfer of certain types of especially deadly firearms and accessories, including semi-automatic assault weapons and large capacity ammunition magazines.