You are here: Home / Archives for State Rep. Emily Weber 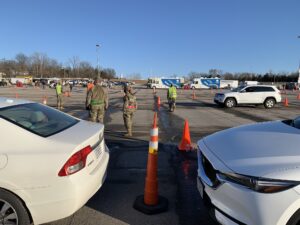 The second day of vaccinations begins this morning at 9 and continues until 7 p.m. Two Missouri National Guard teams are at Arrowhead again today, and about 4,000 additional shots are expected to be given. The Arrowhead event involves the one-shot Johnson and Johnson vaccine. The event is for Jackson County residents only.

Missourinet Kansas City television partner KMBC reports many of those vaccinated Friday are from the poorest and most-impacted neighborhoods from COVID in Jackson County. KMBC’s Mike Mahoney, who was in the Arrowhead parking lot all day Friday, reports things went smoothly. Mahoney says the mass vaccination process took about 40 minutes, from arrival to completion. 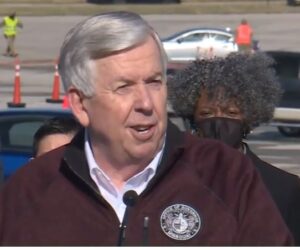 “I’m grateful for Governor Parson, I’m grateful for Senator Barbara Washington, for Representative Bland Manlove. Them allowing us to be a part, they understand that need for access. That need to level the playing field and for social equity,” Mr. Makinen says.

The governor also says that about 40 percent of Missourians will likely decide to not receive COVID vaccinations.

Meantime, Missouri vaccinators have now administered more than 1.9 million COVID shots, which includes the first and second doses. That’s 21.1 percent of Missouri’s population. The state Department of Health and Senior Services (DHSS) COVID-19 dashboard says 225,016 doses have been administered during the past week, which is an average of 32,145 per day.

Governor Parson also announced Friday that vaccine allotments to Missouri are projected to triple, with more than 500,000 initial doses estimated to arrive in Missouri during April’s first week.