You are here: Home / Archives for State Rep. Brian Seitz

A proposed constitutional amendment that would prevent Missouri seniors 65 and older with incomes of less than $45,000 from having to pay property tax was heard by a House committee in Jefferson City on Wednesday afternoon. 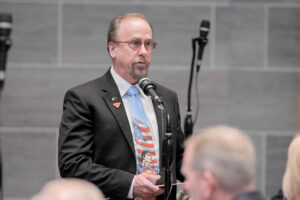 State Rep. Brian Seitz (R-Branson) testified before the House Ways and Means Committee, saying seniors are taxed too much on their homes.

“Those who’ve had the good fortune to buy small homes and have older vehicles are often burdened once again at tax time,” Seitz testifies.

Seitz is sponsoring House Joint Resolution 39, which is a one-page proposed constitutional amendment. While the proposal’s fiscal note says it could cost the state between $7 million and $29 million, State Rep. Don Mayhew (R-Crocker) believes that number is inflated.

Seitz says it’s an issue in his southwest Missouri district, and across the state. His district includes Branson, Hollister, Garber and Walnut Shade.

“The very first person that asked me for help when I began my (2020) campaign for state representative was a bank teller, a senior citizen who had also worked hard all of her life and was having trouble coming up with money to pay the property tax,” says Seitz.

Seitz was the only person to testify about HJR 39 on Wednesday. There was no testimony in support or opposed to the resolution.

He acknowledges that there is some concern about the proposal’s fiscal impact, and testifies he will tweak the bill’s language before it returns to the Ways and Means Committee for a vote.

If Missouri lawmakers approve his resolution, it would be placed on the statewide ballot in 2022.