You are here: Home / Archives for State Rep. Bob Bromley

You can expect a debate about Medicaid expansion on the Missouri Senate floor in Jefferson City later this week.

“The budget will be the floor probably on Wednesday, and we will work our way through that. And so that’s normally a fairly long process with a lot of conversation debate,” Pro Tem Schatz says.

Earlier this month, the Missouri House voted to give final approval to a $34.1 billion budget, one that does not contain funding for Medicaid expansion.

Senate Minority Leader John Rizzo (D-Independence) tells Missourinet that the issue will be debated this week, on the Senate floor.

“I fully anticipate that a vote to fund Medicaid expansion will happen on the floor when it comes up for debate,” Leader Rizzo says.

Medicaid is officially known as MO HealthNet, and it’s a federal and state program that assists with medical costs for residents with limited incomes. Medicaid expansion supporters say Amendment Two, the August ballot measure, would help the working poor. They note it would expand Medicaid for residents between the ages of 19 and 64 with an income level at or below 133 percent of the federal poverty level.

House Budget Committee Chairman Cody Smith (R-Carthage) and other opponents say Medicaid expansion would help able bodied adults. Smith wants to use $342 million of funding to instead support seniors in nursing homes and to provide care for the developmentally disabled.

The state Constitution requires Missouri lawmakers to approve a balanced budget, by early May. 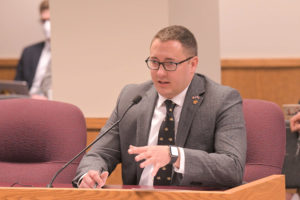 There are just three weeks left in Missouri’s 2021 legislative session, which means floor time in both chambers is critical.

The Missouri Senate Transportation, Infrastructure and Public Safety Committee meets Tuesday morning at 8:30 to hear testimony from State Rep. Bob Bromley (R-Carl Junction), about his DWI legislation. The Missouri House has voted 149-3 to give final approval to the bill, which requires that any person who’s pleaded guilty or been convicted of driving while intoxicated to complete a victim impact program approved by the court.

The Missouri House has voted 126-16 to give final approval to the Sander legislation.