You are here: Home / Archives for State of the State

Governor Nixon in his State of the State Address has called for the legislature to pass the Missouri Nondiscrimination Act, which aims to bar discrimination based on sexual orientation or gender identity.

House Republicans haven’t hammered down a position on that proposal according to Speaker Tim Jones (R-Eureka).

“We haven’t discussed that issue,” Jones says of his caucus. “I’m not sure about the details regarding that matter. I’ll have to sit down with Senator (Tom) Dempsey and speak with him about the matter.”

The legislation was passed by the Senate as an amendment to a House Bill (HB 320) in the final hour of the 2013 session but was not taken up in the House.

Nixon said in his addre, “No Missourian should be fired because of who they are or who they love.”

Governor Jay Nixon (D) is revealing a few clues, but only a few, about what he will say to Missourians in his State of the State Address tomorrow.

Nixon will deliver the annual address at 7 p.m. in the House of Representatives with the members of that chamber and the State Senate present. In it he will lay out legislative priorities and release his proposed budget for the fiscal year that begins July 1. 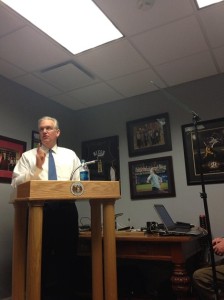 Governor Jay Nixon practices for delivering the 2014 State of the State Address. (Courtesy of his Twitter feed, @GovJayNixon)

You can watch the State of the State Address at Missourinet.com, offered in partnership with KMIZ/KQFX in Columbia.  Coverage begins at 6:45.

Asked about what he will include in that speech on Monday, Nixon says he will make a, “strong case for maintaining fiscal discipline, a very strong case for how the best economic development tool we have in the state is education, and how that at this defining moment for our state we should not miss the opportunity to make the strategic investments that will pay dividends for our state for generations to come.”

Nixon and Republican legislative leaders in the House and Senate did not reach agreement over an estimate of how much money will be available for the new budget year. Nixon says the time for the two sides to come to such agreement has, “come and gone.”  This means some of Nixon’s spending proposals won’t be included by lawmakers when they draft a budget.

Nixon says he is, “convinced that the economy continues to move forward … but if the revenues don’t come in at the level that I think then we’ll make the necessary restrictions through the year to deal with it.”

Nixon has proposed some priorities already. He has called for more money for public schools en route to fully funding the foundation formula for K-12 schools by 2017, as well as additional money for higher education, and the Missouri Children’s Division. Other priorities carry over from last year, such as the acceptance of federal money to expand eligibility for Medicaid and overhauling tax credits.

House Speaker Tim Jones (R-Eureka) will deliver the Republican response, five minutes after the State of the State Address.

Governor Jay Nixon has taken his case for Medicaid expansion to the GOP leadership in the legislature by highlighting support from business organizations. 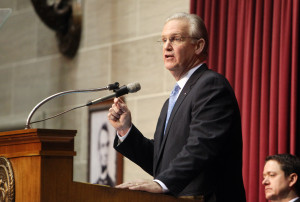 Nixon welcomed several of them during the State of the State Address.

“The Missouri Chamber of Commerce supports the Medicaid expansion, not because they’re big supporters of this president and his agenda but because it’s the smart thing to do.”

Nixon urged lawmakers to put the politics of healthcare aside, which drew laughter from the Republican side of the chamber.

In a pre-Address question-and-answer session with the media, Nixon says convincing Republican leadership is an ongoing education process that he thinks is making progress.

“We see a continuing, growing coalition of folks that understand that this is a right business decision to make. Missouri is paying $1.8 billion in taxes. Sending those to Washington and then standing here quietly and allowing those dollars to be spent in other states is not a good business decision.”

Republicans say one reason not to expand Medicaid is a lack of faith that Congress will keep its funding promises, that would make expansion cost-free to Missouri for three years. Nixon suggests including a provision to roll back expansion in that case.

“I’ve never seen a government program that’s increased go back the other way … it’s an entitlement, and entitlements are extremely difficult to ratchet back.”

Nixon’s budget proposal would use $46 million federal dollars from Medicaid expansion. He says proceeding with expansion would bring $5.7 billion to the state over the next three years and create 24,000 jobs in 2014.