You are here: Home / Archives for State Department of Elementary and Secondary Education

Citing the COVID-19 pandemic and the loss of 300,000 jobs between March and April, Missouri Governor Mike Parson (R) has announced an additional $210 million in budget withholds, including $131 million for the state Department of Elementary and Secondary Education (DESE). 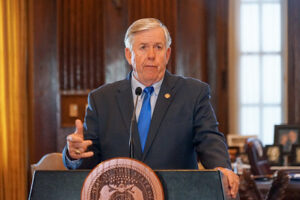 The governor made the announcement during a media briefing on Monday afternoon at the Statehouse in Jefferson City.

Governor Parson says Missouri’s unemployment rate increased from 3.9 to 9.7 percent in April. He notes that the loss of 300,000 jobs is a decrease of more than ten percent.

“It goes without saying that COVID-19 has had severe impacts on our anticipated economic growth,” Parson says. “This is truly unlike anything we have ever experienced before, and we are now expecting significant revenue declines.”

The $131 million in budget withholds for DESE include $123 million for the school foundation formula and $7 million for school transportation.

“I have always been a strong supporter of education. These were extremely difficult decisions I never thought I would have to make in just a few months,” Parson tells Capitol reporters.

Governor Parson was joined at the press conference by DESE Commissioner Margie Vandeven and other Cabinet members.

“It’s important to make these decisions now, so school districts can adjust before next school year. Our intent is to withhold now and avoid withholds once school begins,” says Parson.

The top Democrat in the Missouri House is blaming tax cuts approved by the GOP-controlled Legislature, for the education cuts.

“The governor’s devastating cuts to public education are as much a product of failed Republican tax policy as they are of the coronavirus pandemic,” House Minority Leader Crystal Quade, D-Springfield, says in a written statement. “Every time Republicans chipped away at Missouri’s revenue base, Democrats warned these short-sighted decisions would pay a terrible dividend when the next economic downturn hit, and there always is a next one.”

The Missouri Legislature approved a $35.2 billion state operating budget in early May. The new fiscal year begins on July 1.