You are here: Home / Archives for Stan Kroenke 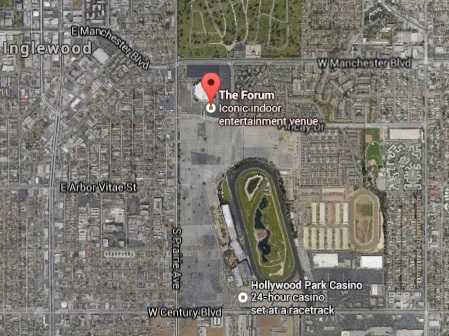 The area surrounding the Forum and Hollywood Park in suburban L.A. where Stan Kroenke plans to build an NFL stadium (photo/Google Images)

The Los Angeles Times is reporting this morning that Stan Kroenke, the owner of the St. Louis Rams, plans to build an NFL stadium in Inglewood, which could certainly mean the return of the NFL, and in particular the Rams, back to L.A.

Kroenke’s Southern Cal plans put pressure on St. Louis to complete a deal for a new stadium or watch the club return back to the L.A. area where they played from 1946 to 1994.

Kroenke bought 60 acres adjacent to the Forum and then joined with the owners of the Hollywood Park race track where they plan to build an 80,000 seat NFL stadium.  He has teamed up with Stockbridge Capital Group, which owns nearly 240 acres, which would give Kroenke plenty of space to build the stadium and have adequate parking.

Under their current dome deal, the Rams can end their 30-year lease early and move from year-to-year because they have not reached an agreement with St. Louis officials on improvements to the stadium. The sides remain about $575 million apart. St. Louis is expected to offer the team a new proposal by month’s end.

Click here to read more on how things are moving along on the Inglewood side of this deal.

Below is a statement from STL stadium task force heads Dave Peacock and Bob Blitz:

“The news today is another reminder of how much competition there can be for National Football League franchises and projects that include NFL stadiums, but it does not change our timeline or approach. It is important to remember this will be a long-term process, but one that the State of Missouri and the St. Louis region are fully pledged to seeing through. We are ready to demonstrate our commitment to keeping the NFL here, and to continue to illustrate why St. Louis has been and will always be a strong NFL market. We will present a plan to Governor Nixon this Friday as scheduled, and we expect that it will meet his criteria, thereby allowing us to share our vision with the public shortly thereafter. In the meantime, we will continue to have discussions with the NFL, as well as Rams leadership.”

St. Louis Rams owner Stan Kroenke was one of the three final bids to be considered to purchase the Los Angeles Dodgers, but a group headed by former L.A. Lakers start Magic Johnson was awarded the team with a winning bid of $2 billion. It is the most an American sports franchise has ever been sold for.

Stephen Ross paid $1.1 billion for the NFL’s Miami Dolphins in 2009, and in England, Malcolm Glazer and his family took over the Manchester United soccer club in 2005 in a deal then valued at $1.47 billion.

END_OF_DOCUMENT_TOKEN_TO_BE_REPLACED

Stan Kroenke has agreed to buy increased shares of the Aresenal soccer club of the Premier League which would raise his ownership holdings from about 30% to 62%. The official announcement is expected to come later today.

Kroenke and his family own the St. Louis Rams, as well as having a stake in the Denver Nuggets, Colorado Avalance and Colorado Rapids of the MLS. With his ownership rights going above 50% for Arsenal, he will gain legal control of the franchise.