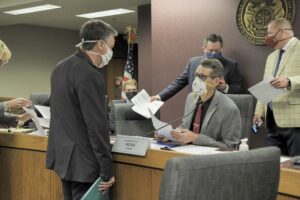 “When I brought him the research and everything, he said we will get this done and we at one point thought we had lost it (the bill) and then it came back, and he made sure this was pushed and continued,” Hicks says.

Missouri Governor Mike Parson (R) signed the bill into law this week. The governor made the issue a top priority during the special session, and Hicks praises him as well.

Governor Parson says the St. Louis Metropolitan Police Department is currently short by about 140 officers, and says the bill can help fill that gap.

Hicks says he’s been working on the issue for years.

The Missouri Senate approved the Hicks bill 25-5 and the House approved it on a 117-35 vote.

Hicks tells Missourinet this is not about politics, noting that he’ll be “done in two years,” referring to legislative term limits for the House. He says this is about giving back to officers who have been putting their lives on the line for citizens.

He also says St. Louis Police Chief John Hayden’s testimony put a spotlight on the issue. Chief Hayden traveled to Jefferson City during the regular and special sessions this year, to testify for the bill. Hayden says his department desperately needs more officers due to the surge in violence.

St. Louis has had 198 homicides this year.

Governor Parson canceled Wednesday’s ceremonial bill signing in St. Louis, after he and the First Lady tested positive for COVID. The event is expected to be rescheduled.