Missouri’s governor says two bills he signed into law on Monday will make communities safer. The two bills were critical components of the governor’s recent special session on violent crime. 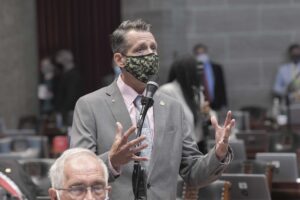 “Over the last several months, several years, we’ve seen that major crime, those homicides keep going up and up and up in the state of Missouri,” Parson tells reporters in southwest Missouri’s Carthage.

State Rep. Jonathan Patterson, R-Lee’s Summit, sponsored the witness protection bill. It was approved by the Missouri Senate 29-0, and the House approved it by a 147-3 vote.

The Patterson bill does not include funding. Missouri House Budget Committee Chairman Cody Smith, R-Carthage, told lawmakers in August that if they approve the Patterson bill, Governor Parson will likely call another special session to fund the program.

State Rep. Peter Merideth, D-St. Louis, issued a statement on Monday, focusing on the funding issue. Merideth says Governor Parson “is more interested in photo-ops than doing the critical work to tackle the causes of crime.”

“Instead of actually taking action to keep communities safe, the Governor is signing a law that is completely unfunded – and as a result it will do little to reduce crime. The Governor should have ensured the program was funded during the special session,” Representative Merideth’s statement reads, in part.

St. Louis Police Chief John Hayden traveled to Jefferson City several times during the special session to testify for the bill, saying his department desperately needs more officers due to the surge in violence. St. Louis has had 198 homicides in 2020. The city had 194 in all of 2019. The “St. Louis Post-Dispatch” reported Sunday that St. Louis is on pace to have 240 homicides this year, the highest in 25 years.

Governor Parson says the St. Louis Metropolitan Police Department is currently short by more than 140 officers, and that House Bill 46 can help fill that gap.

“We have a serious problem with violent crime here in Missouri, and we have seen it escalate even more in recent months,” Governor Parson says. “HB 66 and HB 46 are valuable tools that will build on our efforts to combat violent crime, support law enforcement officers and make our communities safer.”

Legislation eliminating the residency requirement for St. Louis police officers, firefighters and EMS personnel is heading to the Missouri Senate floor in Jefferson City after being approved Tuesday in committee. 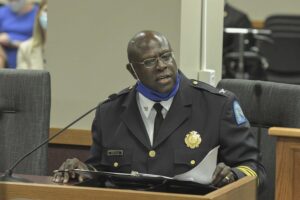 St. Louis Police Chief John Hayden traveled to Jefferson City on Tuesday to testify for the bill, saying “we (St. Louis Police) desperately need more officers and we need them now.” During his testimony, Hayden discussed recent violence against his officers.

Chief Hayden says his department is currently down 145 officers and that the residency requirement is the greatest challenge his department has with recruitment and retention. Hayden testifies that there has been an unprecedented surge in gun violence in St. Louis in the past 12 weeks, with the city averaging more than nine homicides per week.

The Missouri Police Chiefs Association and the St. Louis Police Officers Association testified for the legislation on Tuesday.

State Public Advocate Arnie Dienoff testified against it, saying the only elected official in St. Louis who supports the bill is Mayor Lyda Krewson. He also says the bill only applies to St. Louis and not Kansas City, Springfield or Columbia.

Chief Hayden testifies that no other department in the St. Louis region has a residency rule, and says citizens want more visibility and more enforcement.

Missouri Senate committees approved four other crime bills on Tuesday, including witness protection legislation from State Rep. Jonathan Patterson, R-Lee’s Summit, that would create a fund to provide security to witnesses, potential witnesses and their immediate families in criminal proceedings or investigations.