You are here: Home / Archives for sports referees and umpires

Bipartisan legislation aimed at protecting sports referees, officials and umpires will be heard Monday afternoon by a Missouri House committee in Jefferson City. 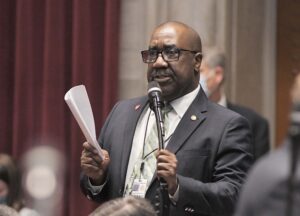 The House General Laws Committee will hear testimony Monday at 5 p.m. from State Rep. Jerome Barnes (D-Raytown), who’s been a high school football and basketball referee for 27 years. Mr. Barnes has also served as a volleyball referee for ten years.

The issue is a personal one for Barnes, who tells Missourinet that officials are being threatened by parents and fans.

“Fans are yelling and hollering: ‘I’ll see you out in the parking lot. You know, my son didn’t do no wrong.’ And it’s like, you blow the whistle on one of them, and they can’t do no wrong,” Barnes says.

He notes a referee was attacked and knocked out in Raytown in 2018, during a JV girls basketball game. The fan came out of the stands, went down on the basketball court and knocked the referee out, according to Barnes.

Under the bill, anyone who commits the offense of harassing a sports official would face up to 90 days in jail and a fine up to $500. They could also face 40 hours of court-approved community service work, anger management counseling and could also be ordered to participate in abusive behavior intervention groups.

Barnes thanks House Speaker Rob Vescovo (R-Arnold) for referring his bill, and he’s thankful to General Laws Committee Chairman Curtis Trent (R-Springfield) for holding Monday’s hearing. Barnes says he’s trying to raise awareness about the issue. He also says recruiting officials is a problem in Missouri, because of the threats and harassment they face.

“Young people 15 and 16-years-old, we used to be able to get them to come out and referee ballgames. They’re having a hard time doing that now, due to the harassment and the way the fans treat them,” says Barnes.

He says the average age of a sports official is in their mid-50s, and says kids are able to play a sport and display their talents because of those referees, officials and umpires.

HB 78 also addresses fans who enter or remain on-site at a school or recreation athletic contest, after being forbidden.

Representative Barnes is also working with State Rep. Brad Pollitt (R-Sedalia) on a separate bill, which would expand the definition of special victim to include sports officials at sporting events.

Click here to listen to the full interview between Missourinet’s Brian Hauswirth and State Rep. Jerome Barnes (D-Raytown), who’s been a high school football and basketball referee for 27 years. The interview was recorded on April 16, 2021: