You are here: Home / Archives for Sporting KC 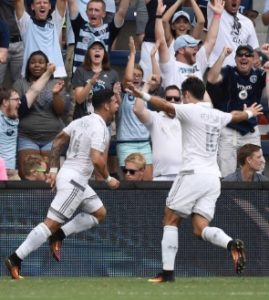 Sporting Kansas City is the first team in MLS history to hold a team to just one shot, accomplishing the feat twice in the same season. The first happened in a 0-0 draw at Los Angeles against the Galaxy on June 2nd. Sporting repeated the feat in the sweltering heat during a 3-0 victory of Seattle Sounders FC on Sunday afternoon.

Seattle did avoid becoming the first MLS team to go an entire match without a shot, but their lone attempt did not even force a save.

Sporting KC moved from 7th to 4th in the Western Conference. Their next two matches are against MLS Cup Champion Portland.

On Sunday, the ceremonial shovels scooped the first patches of dirt as Sporting Club, U.S. Soccer and Children’s Mercy broke ground on the National Training and Coaching Development Center in Kansas City, Kansas. The NTCDC will provide a world-class environment to develop players, coaches, and referees of all ages.  A facility they are calling a first of its kind in the United States.

The $62 million development will not only serve as a training center for Sporting Kansas City, but the site will be home to the U.S. Soccer National Coaching Education Center – providing a permanent, national home for the education of coaches and referees — and the Children’s Mercy Sports Medicine and Rehabilitation Center, which will offer a full range of sports medicine services, resources and programming for youth athletes in all sports.

The NTCDC is planned to accommodate seven full-size soccer fields. It will have five fields upon its opening, including a seven-acre natural grass Super Pitch which consists of three full-size fields and two lighted, synthetic turf fields. In addition, the 80,000-square-foot NTCDC building will feature cutting-edge components:

It will be completed by November 2017 and will be located on the east side of 435 opposite Sporting KC’s stadium and the Kansas Speedway. 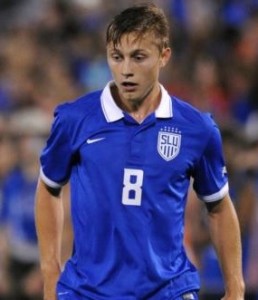 Three former Saint Louis Billikens soccer players were taken during the third and fourth rounds Major League Soccer’s Superdraft on Tuesday. Vince Cicciarelli was taken in the third round by the Columbus Crew; Faik Hajderovic was a fourth-round pick by Sporting Kansas City; and Tyler David was selected in the fourth round by the Vancouver Whitecaps. It is the third year in a row Saint Louis has had multiple players taken in the MLS draft. Last year, four Billikens were selected, while two Billikens were drafted in the 2014 MLS draft. Since the first draft in 1996, 30 former Billikens have been drafted into MLS.

“All three of these players came to SLU to chase their dream of playing professionally, and we are fortunate to be a part of helping them realize that dream,” Saint Louis head coach Mike McGinty said. “We look forward to following their careers and wish them the best of luck at the next level.”

Cicciarelli finished his collegiate career at Saint Louis after playing three seasons at Notre Dame. He led the Billikens in 2015 with six goals en route to second-team All-Conference honors.

Hajderovic transferred to SLU for his senior year after playing three seasons at Evansville. He finished his career with 25 assists, the most among active NCAA Division I players last year.

David was a four-year starter for the Billikens. He picked up first-team All-Conference honors as a senior after starting every game. David contributed to a defensive effort that helped the Billikens tie for the league lead in fewest goals allowed. 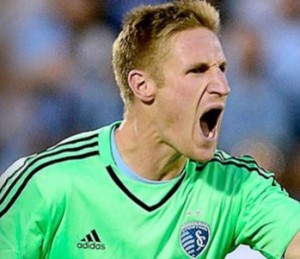 The 29 year old Melia went 15-8-5 for Sporting KC after playing backup to MLS All-Stars Nick Rimando at Real Salt Lake and Dan Kennedy at Chivas USA. He did not appear in any regular season matches for Real Salt Lake from 2010-11 and started five games for Chivas USA from 2012-2014.

Melia signed with Sporting Kansas City for the 2015 season and earned a starting role in May. He became the first goalkeeper in MLS history to record six shutouts in his first nine league matches for a new team.

Melia is Sporting Kansas City’s fourth Comeback Player of the Year in team history. Tony Meola won the award in 2000, Chris Klein was a two-time recipient in 2002 and 2005, and Eddie Johnson took the honor in 2007.

The Comeback Player of the Year is selected through league-wide voting of media members, MLS players and MLS executive staff. The award honors a player who has overcome injuries or adversity in order to achieve success during the regular season.

Watch an interview with Melia.  VIDEO/SportingKC.com 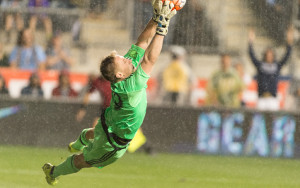 Entering the 2015 Lamar Hunt US Open Cup Final, Sporting Kansas City goalkeeper Tim Melia’s workload was relatively light. Before the championship game against the Philadelphia Union kicked off at PPL Park, Melia had only made seven total saves en route to his team’s third title game appearance. However, in US Open Cup Final, Melia was called upon several times, making eight saves as the two teams finished extra time tied at 1-1. In the penalty kick shootout, Melia made a pair of saves to help Sporting lift the trophy.

For his efforts, Melia was voted TheCup.us Player of the Round for the Final. He edged teammate Krisztian Nemeth, who scored KC’s only goal in regulation, but missed his spot kick attempt in the shootout. Philadelphia’s Sebastien Le Toux also received consideration for scoring his 16th career Open Cup goal, extending his Modern Era record.

The award is voted on by TheCup.us staff and a select panel from the North American Soccer Reporters.

END_OF_DOCUMENT_TOKEN_TO_BE_REPLACED

The Major League Soccer club, Sporting Kansas City said it’s agreement on naming-rights of the team’s stadium with Livestrong, the cancer-fighting charity launched by Lance Armstrong, is finished. Sporting Kansas City said it would part ways with Livestrong, which claimed the soccer club failed to live up to a financial agreement struck between the two organizations in March 2011.

Sporting Club CEO Robb Heineman released a statement on the club’s website which read in part:

Over the course of the past year, it became clear that LIVESTRONG no longer shared the same spirit of partnership, despite our perseverance to the contrary. We realized at the time this could be the beginning of a tumultuous period for the foundation. We were patient as they sorted through these issues. Despite the distractions, leadership from LIVESTRONG and Sporting Club were actively engaged in discussions to redefine expectations for both parties. Based on assurances from key LIVESTRONG leadership, we believed this ongoing dialogue was very positive.

This morning we were disappointed to learn LIVESTRONG is utilizing aggressive tactics designed to force us into an unsatisfactory arrangement. We willingly admit we were not expecting the foundation to treat a partner in this manner. Even more surprising is that LIVESTRONG would take this action in the midst of a significant transitional phase for their organization.

LIVESTRONG contends that Sporting KC only paid $250,000 of a proposed $1 million agreement for 2012. The news doesn’t get better this week for the charity foundation, the same week that Armstrong admits using performance-enhancing drugs to Oprah Winfrey, during a record-breaking cycling career highlighted by seven Tour de France titles, which have been stripped.

Sporting Kansas City was eliminated from the 2012 MLS Cup Playoffs on Wednesday, falling 2-1 on aggregate score after a 1-0 win over the Houston Dynamo at LIVESTRONG Sporting Park in the second leg of the Eastern Conference Semifinals. After a 2-0 loss on Sunday at Houston, Sporting Kansas City came out needing two goals to level the two-game series.

Seth Sinovic scored his first career MLS goal in the 64th minute in front of 20,894 fans, the second-largest crowd in stadium history.  Sporting Kansas City finished with 20 shots (second most in club history for the postseason) and 71 percent of the possession, compared to just three shots taken by Houston, all in the first half.

Houston will advance to the Eastern Conference Championship to take on the winner between the New York Red Bulls and D.C. United, whose game was postponed on Wednesday because of weather.

Sporting Kansas City goalkeeper Jimmy Nielsen, defender Aurelien Collin and midfielder Graham Zusi were named to the gameday roster for the 2012 MLS All-Star Game. The club’s three representatives, tied for most of any MLS team, will be available for selection to play against UEFA Champions League winners Chelsea FC on July 25 at PPL Park in Philadelphia, PA.

All three players were voted into the MLS All-Star First XI earlier this month and join the club’s list of 45 all-time All-Star selections (full list below).

In addition to the 18 MLS All-Stars on the gameday roster, 14 more players will be named 2012 MLS All-Stars as determined by player voting. Those selections will be unveiled on July 25. 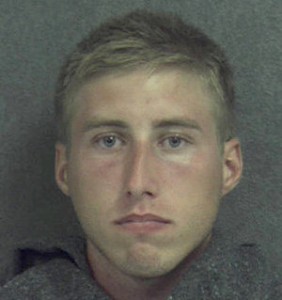 Following up on the bizarre story of the Sporting KC soccer goalie who was hit by a bobble head in a recent game…the suspect’s name and mug shot have been released.

Cody J. Wente, 23, of Leavenworth, was charged Friday with aggravated battery, a felony. Bail has been set at $10,000, and he currently remains in custody in Wyandotte County.

Sporting Kansas City goalkeeper Jimmy Nielsen fell to the ground during last night’s match with Portland after he was hit by a bobblehead thrown by fans near the goalie after Sporting KC scored a goal on the other side of the field in the 26th minute. The person who threw the bobble head was caught.

The crowd was cheering for a goal that put Sporting KC up 1-0, when Nielsen fell to the ground causing concern for the more than 15,000 in attendance. Nielsen thought at first that he walked into a goal post. “I did not see it coming,” Nielsen said. “First I thought I walked into the post, then I realized I was a long way from the post. I had a crazy headache. I was like ‘Oh my God, I need to lie down for a second. Then I saw I was bleeding and was just waiting for them to come and fix it so I could play again.

Nielsen stayed in the game and finished in a 3-1 win.

Team official Rob Thomson said people were escorted from their seats. “Two people from the same group in the third row both allegedly threw the head of bobbleheads, one of which struck Nielsen, and both were apprehended.”

For the record the bobblehead was of Omar Bravo.