You are here: Home / Archives for spelling bee 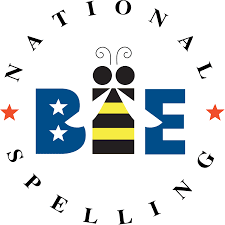 The competition is May 26 through the 31 in National Harbor, Maryland. It will include 565 spellers from all over the country.

This year’s kids are from all over the state, ages 11 to 14. One of the contestants, Alice Liu of St. Louis, will make her third consecutive appearance in the bee. 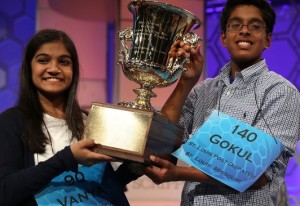 Vanya Shivashankar (left) and Gokul Venkatachalam from Chesterfield, Mo. are the 2015 champions (photo/spellingbee.com)

14-year old Gokul Venkatachalam from Chesterfield, Mo., and 13-year old Vanya Shivashankar from Olathe, Ks., are sharing the title of top spellers after they went back and forth through ten-rounds of championship words.

Some of the words included bouquetière, caudillismo, thamakau, scytale, Bruxellois and pyrrhuloxia. Finally, after all of the words were used from the championship list, it was decided on Thursday that both would share the title as champions of the Scripps National Spelling Bee.

The bee had never ended in a tie for 52 years, until last year. Now it has happened two years in a row.


Gokul correctly spelled the word “nunatak.” I knew it right away,” Gokul said. “I didn’t want to keep everyone waiting.” (listen below)

Each took home a gigantic trophy and over $35,000 in cash prizes.

Venkatachalam, an eighth grader, said he hopes to attend Stanford and become an entrepreneur or stockbroker, but first things first…he’s focused on the NBA Finals. Venkatachalam wore a LeBron James jersey under his button up polo for good luck and will now watch his favorite NBA player compete for a world title.

Another first in the bee was also accomplished.  Shivashankar is the first sibling of a past champion to win. Her sister, Kavya, won in 2009.