You are here: Home / Archives for Senator Josh Hawley

Missouri’s junior senator says tornado damage assessments must get done quickly so relief can get to impacted communities like Jefferson City and Eldon. 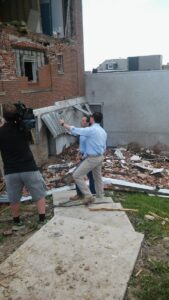 Missouri Senator Josh Hawley views a tornado-damaged building near the old MSP in Jefferson City on May 25, 2019 (Brian Hauswirth photo)

U.S. Sen. Josh Hawley (R) toured tornado-damaged Jefferson City on Saturday, where Fire Chief Matt Schofield told him that about 240 homes and businesses have been damaged by the storm. The National Weather Service (NWS) in St. Louis says the EF-3 tornado packed an estimated peak wind of 160 miles per hour.

“A lot of them (homes and businesses) destroyed. There’s going to be a lot of need for relief here,” Hawley says. “My heart just goes out to the families especially who are looking at the loss of their home, some of them without places to stay.”

Hawley took a walk Saturday afternoon along East Capitol Avenue, which is east of the Statehouse and near the old Missouri State Penitentiary (MSP). Hawley visited with residents and shopkeepers who’ve been affected.

Hawley spoke to a Missourinet reporter, across the street from a damaged building that Hawley says could cave in.

“I mean we’re looking at one whole side of the building is literally gone,” says Hawley. “The roof is gone, and I’m told that we can expect this last outer wall to fall.”

There are bricks, blocks and boards surrounding that building, along with broken glass.

Hawley praises the volunteers who showed up Saturday with chainsaws and tools, as well as mid-Missourians who have taken in neighbors and family members impacted by the tornado.

He says it’s a testament to the spirit of Missouri.

There were no fatalities in the Jefferson City tornado.

During the East Capitol Avenue interview with Missourinet, Senator Hawley also called out a fellow Republican on Capitol Hill for holding up a $19 billion disaster relief package.

“This is enough of this. People can, they should bargain with other chips, not with this. We should not be holding up relief for our farmers and our communities,” Hawley says.

Senator Hawley tells Missourinet he wants U.S. House Speaker Nancy Pelosi (D-California) to bring the House back in on Memorial Day, to vote on disaster relief.

The U.S. Senate approved it on Thursday.

Some businesses that normally would be closed on the weekend have been open, due to the tornado.

The United Way of Central Missouri’s Jefferson City office was open on Sunday, and insurance companies like State Farm and American Family have set up tents at Capital Mall, where adjusters and agents are stationed.

Click here to listen to Brian Hauswirth’s full three-minute interview with U.S. Sen. Josh Hawley, which was recorded on May 25, 2019 near the old Missouri State Penitentiary in Jefferson City: 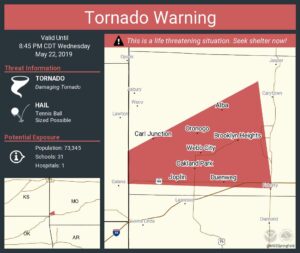