You are here: Home / Archives for Senate

State senators are considering a bill to create a refundable tax credit that would attract people to attend amateur sporting events that would generate revenue for the state.

The refundable sports tax credit would be available for sports commissions, certain nonprofit organizations, counties, and municipalities to offset expenses incurred in attracting the sporting events to Missouri and benefitting the state economically.

State Senator Eric Schmitt who proposed the bill says it’s an opportunity to reestablish Missouri as a place where a lot of sporting events are hosted.

“Through the process which is the way the senate is supposed to operate as it made its way through the committee, on to the floor, and over a couple of years quite frankly has gotten to a place where it’s a better bill,” he says. “It’s a more accountable bill and it gets at what we’re really trying to get at which is to try to bring these events to our state to generate revenue not only just for the state, but also the businesses that support these kinds of events.”

Schmitt says the bill would create a tax credit of five dollars after the event is held for each admission ticket sold for an in-state sporting event and would be based on how many people actually attend the event.

Also benefitting from the tax credits would be the vendors, the restaurant owners, bar owners, hotel owners, and the industry that surrounds tourism.

The bill would also create an income, financial institutions, and corporate franchise tax credit that’s equal to fifty percent of an amount of a donation made to either a sponsor or a local organizing committee for the purposes of attracting sporting events to Missouri.

In the last few legislative sessions lawmakers have been faced with increasing challenges to create a state budget. Another great one awaits them when General Assembly convenes again on Wednesday. 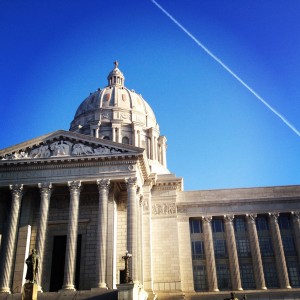 Lawmakers return to the State Capital on Wednesday.

The last of the federal dollars from the American Recovery and Reinvestment Act, about $400 million, went into the budget for fiscal year 2012. With none left to help shore up the new plan, Senate Appropriations Committee chairman Kurt Schaefer (R-Columbia) says legislators will be tested. “What we’re looking at is kind of hitting part of that wall that we would have hit back then, but for all that money that the federal government borrowed and then sent out to the states. So this is the year that, I think, where we have to decide what our priorities are going to be.”

Schaefer says those priorities are clear, based on a provision in the Constitution. “Number one in that list is public debt, and that always is our first thing that we fund, but number two is public education. So, I think this is really the year that we need to demonstrate that we’re going to follow our constitutional responsibility and what the people of the state of Missouri have determined is a top priority, and that’s K through 12 and higher education.”

The House, the Senate and the Governor arrived at an estimate of projected revenue of 3.9 percent growth. Senator Schaefer thinks that is fairly accurate, and represents about $7.5 billion, or about $285 million more for fiscal year 2013 than 2012.

The Senate Appropriations Committee’s first hearing of the new session is set for Tuesday, January 10.