You are here: Home / Archives for Senate Bill 600

Sweeping legislation aimed at cracking down on violent crime was signed into law late Monday afternoon by Missouri’s governor in Jefferson City. 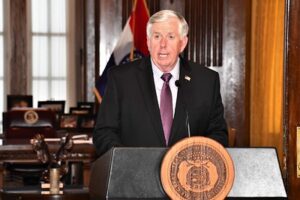 Governor Mike Parson (R) announced that he would sign Senate Bill 600 during his media briefing with Capitol reporters. He describes the bill as a large step toward safety and justice for communities.

Critics say it will cause Missouri to have to build two new prisons.

The bill updates Missouri’s law involving the offense of conspiracy, a point emphasized by the governor during today’s press conference. Parson says that under current law, a person cannot be convicted of an offense based upon a conspiracy to commit it unless the person committed an overt act.

Onder testified before a legislative committee in February, saying there were 351 carjackings in St. Louis City in 2019.

“These are violent crimes in which Missourians are terrorized in what should be a safe sanctuary, their cars,” Onder testified that day.

He noted during his February testimony that there was no uniform sentencing in Missouri for carjacking. Some suspects are charged with robbery, while he said others are charged with stealing and are being sentenced to just four months in prison.

Critics of the bill include Americans for Prosperity-Missouri and the ACLU of Missouri.

“Governor Parson’s commitment to signing SB 600 is shortsighted. We know that crime bills like this one exacerbate racial inequalities and fuel mass incarceration with no actual improvement to public safety,” ACLU of Missouri policy director Sara Baker says, in a statement.

Baker says the bill “tears money away from public education and services proven to decrease crime.”

The bill is also opposed by Americans for Prosperity-Missouri (AFP-MO), which predicts the law will increase Missouri’s prison population by 2,500 and will cause two new prisons to be built.

“Locking up more people does not result in safer neighborhoods, but rather harms taxpayers and needlessly rips families and communities apart,” AFP-MO state director Jeremy Cady says, in a statement. Cady says it will cost $500 million to build the new prisons.

With the governor’s signature, the new law will take effect on August 28.