You are here: Home / Archives for Sen. David Pearce

When the Missouri Legislature gets back to work this week, a lightweight cotton tradition is expected to make a comeback – Seersucker Wednesdays. The style, especially popular in the South, has been in full force for several years throughout the great halls of the Missouri Capitol. 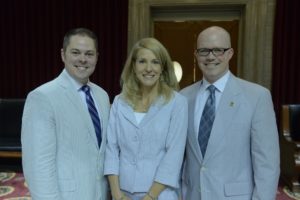 Beginning the first Wednesday after the General Assembly’s spring break, many lawmakers proudly fashion the striped ensemble. The practice has been to wear seersucker outfits every Wednesday until the regular session ends in May.

The weekly showing is about as united as you can get. Lawmakers from both parties, Capitol staffers, and even lobbyists dig out their seersuckers and are seen proudly strutting around in the clothing. Some enthusiasts have branched out from the earlier days of wearing the traditional blue striped pattern to wearing yellow, brown, pink, and other colors today.

Occasionally, you will find a lawmaker who wears a seersucker suit on a day other than Wednesday – instilling confusion (and maybe disappointment) among some people in the Capitol.

The Missouri Legislature’s seersucker craze dates back several years. How far back is unknown. But there is one notable moment in its history of wearing the airy trend.

In 2013, the Missouri Legislature made national headlines after former state Sen. Ryan McKenna, D-Crystal City, offered an amendment to an education bill that would have banned the wearing of seersucker suits by anybody older than eight. 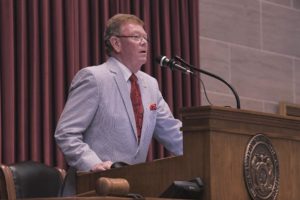 People not familiar with the Senate might be puzzled by the reference to Koolaid. McKenna was referring Matt Michelson, the aide to former state Sen. David Pearce, R-Warrensburg, who was known for wearing an orange seersucker explosion on Wednesdays.

McKenna’s despise for the fabric fueled a playful clash among some seersucker-loving lawmakers. Not long after his attempt to ban the fashion, former state Sen. Eric Schmitt, Missouri’s current attorney general, was the ringleader of an effort to give some love to the summer wear. He and other lawmakers dressed to the seersucking nines and posed for pictures. They blasted the photos on social media. Members of the Capitol press corp joined in promoting the friendly fued online.

So, for the newcomers to the Missouri Capitol, you have been warned. The breezy wardrobe is a thing here on Wednesdays.