You are here: Home / Archives for Sedalia-Pettis County Economic Development 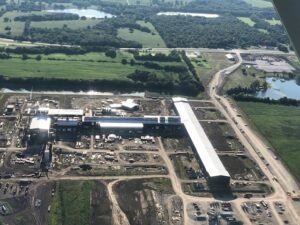 State Department of Economic Development (DED) Director Rob Dixon tells Missourinet the Nucor plant is scheduled to open on December 27 or 28. The steel rebar manufacturing plant is one of the largest projects Missouri has landed in the past decade.

It’s being built near Highway 65, and will be the anchor tenant of Sedalia’s new rail industrial park.

Sedalia-Pettis County economic development executive director Jessica Craig tells Missourinet about 2,500 people have applied for 250 jobs, primarily steelworker positions. She says about 160 have already been hired, and some of them are driving from as far away as Columbia and Kansas City.

The employees have been training at Nucor plants in Texas, Alabama and Mississippi.

The average salary for a Nucor steelworker is about $65,000. Craig says Nucor is still hiring for entry-level production steelworkers, and she encourages anyone interested to apply on the Nucor website.

Craig has said Nucor’s decision is a game changer for Sedalia, which has about 70 other manufacturers.

SEDALIA, Mo.- About 500 construction workers are building a massive $400 million steel plant in west-central Missouri’s Sedalia. The plant, which is being built near Highway 65, will be the anchor tenant of Sedalia’s new rail industrial park. 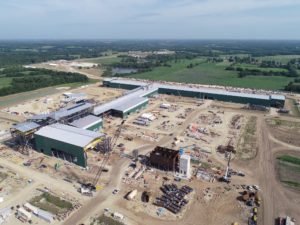 “If you’re coming into Sedalia from the north (on Highway 65), you’ll see it coming out of the ground. There’s cranes up, there’s construction underway, there’s people being hired,” Dixon says.

The steel rebar manufacturing plant is one of the largest projects Missouri has landed in the past decade.

The average salary for a Nucor steelworker is about $65,000.

“We’re working with State Fair Community College, the state Department of Economic Development and Nucor to try to get some folks trained and ready to go on day one,” says Dixon.

Charlotte-based Nucor has been training the new Sedalia steelworkers at their plants in Alabama, Mississippi and Texas.

Dixon emphasizes that Nucor is still hiring. He says applicants can visit nucor.com or the DED website.

Jessica Craig says some of the steelworkers who’ve been hired in Sedalia are driving from as far away as Columbia and Kansas City. She also tells Missourinet about 50 of the new employees are Nucor transfers from other plants, moving to the Sedalia area.

She says Nucor’s decision is a game changer for Sedalia, which has about 70 other manufacturers. Craig says the project will be “transformative” for Sedalia.

Click here to listen to Brian Hauswirth’s full interview with Missouri Department of Economic Development Director Rob Dixon, which was recorded on August 15, 2019 at the State Fair in Sedalia: