You are here: Home / Archives for school transfer

The state House is anticipated to take up this week legislation meant to fix the state’s student transfer law.

Opponents including the Missouri Association of School Administrators say the provision is a step toward vouchers and call it a “deal breaker.”

Proponents say the so-called “private option” is part of giving students in poor-performing districts immediate access to high-quality schools and says it mean the only close option for some students.

In the following Google Hangouts, State Director of the Children’s Education Council of Missouri Kate Casas, who is largely in favor of the legislation, and Pattonville School Superintendent Mike Fulton who says he has some problems with it, discuss their positions.

Attempts to fix issues with Missouri’s student transfer law will be one of the focuses in the last four weeks of the legislative session. 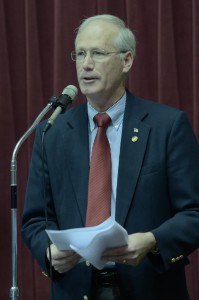 Numerous lawmakers and groups have been working this session on possible changes to a 1993 law that lays out how students can transfer from districts that have lost accreditation to better-performing districts. That law has caused financial problems in unaccredited districts, who must pay for those transfers.

Representative Rick Stream (R-Kirkwood) is the handler of a Senate transfer fix bill (SB 493) that will be brought up in a House committee Tuesday.  Stream hopes the bill can clear the committee Tuesday and reach the House Floor the following Monday, three weeks before the end of the session.

He says it is a priority for House leadership. “The Speaker and the Floor Leader have promised to move it quickly … we’re going to move this bill fast.”

That bill, which cleared the Senate in February, already proposes determining whether individual school buildings are accredited and only removing an entire district’s accreditation if 55 percent of its buildings are unaccredited, disallowing transfers for students who have not lived in an unaccredited school’s jurisdiction for less than a calendar year, and allowing students to transfer to private, non-religious schools or accredited buildings in the same or an adjacent county.

Stream says after talking to many lawmakers in both parties and both chambers, education groups and the Legislative Black Caucus, three key changes to the Senate bill will be considered Tuesday.

One would be to ask sending districts to pay 70 percent of their own tuition to the school districts taking their students, rather than 90 percent of a receiving district’s rate as is currently written in the Senate legislation.

A second change would add charter schools to the places a student in an unaccredited school building can transfer.

“If our goal is to get all of the students in these unaccredited districts into a high-quality educational environment right away, then we have to give them the options to do that.”

A third alteration would have review teams help districts on the verge of unaccreditation figure out how to stop sliding.

House Speaker Tim Jones (R-Eureka) says his caucus is trying to build a strong majority of support for student transfer legislation. Governor Jay Nixon (D) has said he opposes allowing the use of state money to pay for students to transfer to private schools, which SB 493 would.

Missourinet asked Jones if Republican leaders are gearing up for the possibility that Nixon would veto the transfer bill and they would have to try and overturn him.

“Everything’s going to have to be on the table to solve an issue that is extremely important for us to solve this year,” says Jones.