The Missouri legislature has overridden Governor Jay Nixon’s veto of Senate Bill 749, legislation meant to allow individuals and employers to opt out of insurance coverage for abortion, birth control and sterilization. The Senate voted 26-6 for the override, the House had just enough votes for the necessary two-thirds majority, 109-45. 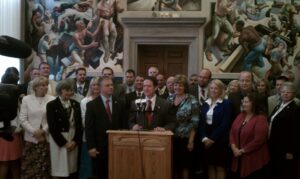 In debate in the House, three Democrat women spoke against the override. One of them, Stacey Newman (D-St. Louis), said the bill was not about religion. “Senate Bill 749 is actually about birth control. I also want to remind you what birth control is and what it means to women in Missouri. Birth control determines every woman’s social, their economic and their political equality. Every single woman.”

Representative Linda Black (D-Bonne Terre) noted her conservative record and pro-life beliefs when she spoke against the override. “I believe that the life blood starts at conception and that God protects that through the entire process and that we as human beings and citizens do everything to prevent abortions, but Mr. Speaker I don’t believe that this bill, in my heart, will prevent abortions. I think if we cut off the contraception to women, we’re going to create more abortions and I would never vote for anything that would create that possibility.”

Representative Tim Jones (R-Eureka), who was voted Speaker in the beginning of the veto session, said the issue was tied to the Affordable Care Act. “Senate Bill 749 was an effort to address some of those problems inherent in that bill. I credit Senator (John) Lamping with having the vision and the foresight to recognize that issue early on in the last session and to move that bill skillfully over to us in the House … it’s become more important than ever, because of the Supreme Court upholding Obamacare, that we work to protect the religious freedom, liberties, conscience rights and more importantly, the business decisions of Missouri’s small business owners from this massive federal intrusion.”

The bill is already the subject of a lawsuit filed this afternoon in Cole County Circuit Court, that says the law files both state and federal law including the Affordable Care Act, the Employee Retirement Income Security Act, separation of church and state and Missouri employment discrimination statute.

This is the 24th veto override in the state’s history and the second in as many years, after the legislature last year overturned Governor Nixon’s veto of a bill establishing new congressional districts.

The House did not take up HB 1329 to attempt to override that veto. Jones said in a morning press conference that there was “great concern” in his caucus about the bill, much of it stemming from the issue raised by the Governor of taxes being collected retroactively on more than 122,000 vehicle purchases made by Missourians from other Missourians, privately, or from out-of-state dealers.

Jones blamed the Governor for the legislation having flaws that resulted in the veto and discouraged lawmakers from voting to override that veto. “Our governor was absent from all policy discussion during the legislative session, and instead of weighing in in a timely fashion and offering a solution and offering leadership on the issue, he decided to veto the bill.”

Jones says he would support a special session to deal with that issue. Governor Nixon says that won’t happen.

House Republicans could attempt overrides of several vetoes by Governor Jay Nixon, but two issues are expected to be at the forefront of today’s veto session.

Republicans will have to start in the Senate to attempt an overturn of Senate Bill 749, to allow employers and individuals to opt out of insurance coverage for contraception, abortion and sterilization. House Minority Floor Leader Mike Talboy (D-Kansas City) says that veto will be tough to sustain.

Talboy says Republicans will have a much harder time finding the votes to overturn the veto of HB 1329, to allow sales tax collections on vehicle purchases made out of state or from private Missourians.

“I know that there are some Democrats that, for their area, feel that it is vitally important. However unless you get to a 95, 96, 97-type area with the Republican votes, I don’t know that there are enough Democratic votes to even come close to anything there.”

A two-thirds majority, 109 votes, is necessary to overturn a veto in the House. When the bill passed in May it received 122 “yes” votes. 44 of those were from Democrats, but 16 Republicans voted against it.

Some lawmakers say enough Democrats might switch their vote to side with the Governor to fall short of the veto override. Or, they say Governor Nixon might have swayed enough lawmakers by saying more than 122 thousand Missourians will retroactively owe taxes on vehicle purchases made since March if the veto is overturned.

Talboy says the Governor’s office has been contacting members of his caucus. “As far as how many of them have had in-depth discussions, no I don’t know how many of those folks were there, but I know they’ve called me asking where I am and then kind of giving me the pitch on why they feel that it is important to veto and important to sustain the veto.”

The Kansas City Star reports one House Democrat was recently targeted in a mailer paid for by a nonprofit organization funded by the Democratic Governors Association, America Works USA, for supporting the bill in May. Representative Genise Montecillo (D-St. Louis) and 19 Republicans were the subjects of mailers.

Talboy says that hasn’t been popular among House Democrats. “That has caused some consternation in our caucus … but as far as whether or not it’s going to make any difference moving forward on this bill, I don’t think anybody that got the mailer changed their mind based upon it.”