The state House on Tuesday completed its vote to overturn Governor Jay Nixon’s (D) veto of a tax cut proposal, SB 509, that Nixon says would jeopardize funding for state programs including education, and could even prove to eliminate $4.8-billion in revenue.

Upon the House’s vote to complete the veto override, Nixon issued this statement:

“Missouri families and businesses know that public education is the best economic development tool there is, and that is why I vetoed Senate Bill 509,” Gov. Nixon said. “While scaled back from last year’s billion-dollar House Bill 253, Senate Bill 509 fails to prioritize or adequately protect public education at a time when quality public schools are more important than ever to our ability to create jobs in the global economy. And while its authors may have delayed its impact, Senate Bill 509 remains a very real threat to the principles of fiscal discipline that have helped us maintain our spotless AAA rating for decades. As I have from Day One, I will continue to manage the budget with the resources available and keep our state moving forward.”

The only Democrat in the State House who voted for a proposed income tax cut says he still doesn’t know what he thinks of Governor Jay Nixon’s (D) concerns about the proposal. 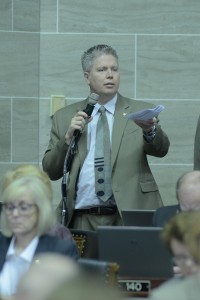 Representative Jeff Roorda (D-Barnhart) has had a few days to review the contention of the Nixon Administration that the bill would wipe out $4.8-billion in state revenue by eliminating state taxes for all income beyond $9,000 a year.  Republicans say that claim is “laughable.”

Nixon is expected to veto that legislation and legislative Republicans are expected to then attempt to overturn his veto. If all 108 House Republicans vote to overturn they would still need at least one Democrat to vote with them. Since Roorda voted for the bill initially, he is being asked whether he could be that one.

“I’d like to not be in this situation,” says Roorda. “I feel a bit in the spotlight and I certainly didn’t seek the spotlight in this case.”

Roorda says he still wants more information about what the bill would actually do.

“The danger is that because of [the Hancock Amendment] if the courts say [Nixon is] right, you’re eliminating the top bracket through the legislative language, statutory language, we couldn’t fix it over here. “We’d have to go back to the voters,” says Roorda. “Although the bill wouldn’t have taken effect yet with the cuts, it would be enacted and would be a tax increase.”

Roorda thinks the bill does too much for corporations and too little for working people, but says he voted for it because his options are limited as a member of the minority.

“It does do something for working families,” Roorda says.

Roorda says Governor Nixon’s office has been reaching out to him and House Speaker Tim Jones (R-Eureka) hasn’t.

“My vote’s very much in play,” says Roorda.

If Nixon is going to act on the bill he must do so this week.  If he does veto it, the decision whether to vote to override might never fall to Roorda.  Because it is a Senate bill, the Senate would first take it up to consider an override.  23 votes are needed in the Senate to override a veto.  Republicans hold 23 seats in the Senate.