You are here: Home / Archives for Santa Claus 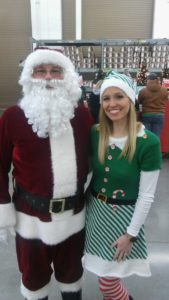 Tim Hull, who spent 32 years with the Patrol before retiring, met individually with about 100 children during this month’s event, which took place at Walmart East.

“I like to volunteer to do stuff in the community and get involved, and this is one way to do that,” Hull says.

Operation T.O.Y.S., which stands for Taking Our Youth Shopping, is an opportunity for children who otherwise would not be able to celebrate the holidays.

Hull says it’s a good bonding experience for the children and the officers, adding that he loves doing it. It’s his sixth straight year serving as Santa.

“Also keep my ties with law enforcement that I’ve had for so many years, so it’s a good fit for everybody,” says Hull.

Hull has participated in the Jefferson City event in various roles since 1992.

“I saw one little girl in there with a hammer in her cart, so you know that’s got to be for mom or dad or grandma or grandpa or somebody in the family,” Hull says.

Missouri State Highway Patrol Sergeant Scott White tells Missourinet some of the children bought shoes and coats for their siblings.

Law enforcement officers from mid-Missouri raised money throughout the year to help purchase Christmas presents at the event. Fundraising done by officers and civic groups allowed each child to purchase $150 in gifts for family members and themselves. Groups include the Fraternal Order of Police Lodge #19, the Elks Lodge, Lions Clubs and Kiwanis.

Click here to listen to the full interview between Missourinet’s Brian Hauswirth and retired Missouri State Highway Patrol Captain Tim Hull, which was recorded on December 14, 2019 in Jefferson City: