You are here: Home / Archives for Sam Brownback

Kansas is on the verge of banding with 8 other states including Missouri in forming an interstate health care compact, which would let states go their own way with health care rather than participate in the federal healthcare reform law.

The same plan that has passed out of the Kansas legislature, and has become law in 8 states, was first proposed in Missouri. It needed two things to be ratified:  passage in at least two states, and Congressional authorization.

Representative Eric Burlison (R-Springfield) sponsored the first interstate compact proposal, which was enacted in 2011. He says states in the compact would have an option other than the Affordable Care Act.

“Let states decide what’s in the best interest for their citizens and if something’s working in another state, then we can glean ideas from that state and implement them in our state,” says Burlison. “That way you are seeing innovation at work and you’re seeing creative ideas at work instead of supressing every state with a one-size-fits-all, mediocre solution.”

Oklahoma Congressman James Lankford (R) has introduced legislation that would give Congressional approval to the compact. It has been referred to a subcommittee. If it clears the Republican-controlled House it faces a tough road in a Democrat-controlled Senate, which Republicans hope to take control of in elections this year.

“It may not be this [Congress] that’s able to do it, but any future legislature could adopt the interstate compact,” says Burlison.

Governor Jay Nixon has issued a letter to his counterpart in Kansas urging him to reconsider that state’s intention to study diverting water from the Missouri River into Kansas. Nixon tells Governor Sam Brownback the Missouri River is vital to Missouri’s way of life and economy. 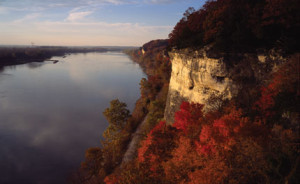 A 1982 study of the plan to divert water from the Missouri River into Kansas put the cost at an estimated $3.6-billion dollars. (photo courtesy; Missouri Department of Natural Resources)

Kansas officials are planning to move forward with a study of constructing an aqueduct to divert 4 million acre-feet of water from the River into Western Kansas to help support agriculture.

Nixon tells Brownback, “Both of our states would benefit from a more global discussion of the future use of the Missouri River,” adding, “neither of our states is well-served by the approach exemplified by this project.