You are here: Home / Archives for rural broadband

A southwest Missouri GOP congressman is bringing in a key Democrat on Capitol Hill for this week’s farm tour across the Ozarks. 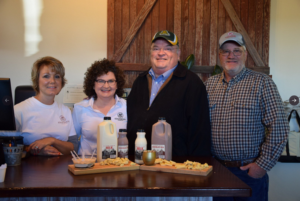 “He’s a buddy of mine and he’s what I call a DINO, because he’s a Democrat in name-only, he votes pretty much like Republicans,” Long says. “But Collin is going to come down and be on our ag tour with us, which is really exciting for people.”

Long says they’ll be visiting several farms, and rural broadband is expected to be a main topic during the tour.

“Springfield and then we go out to Rogersville and then down to College of the Ozarks (in Point Lookout), so we do a east side, west side rotate every year and this is our east side of my district year,” says Long.

He and Peterson just returned from Brazil, where they toured a massive soybean and cotton farm. Long says Brazil is “ramping up production” of soybeans.

Peterson’s committee has jurisdiction over numerous issues, including the farm bill, disaster assistance and international trade.

Long spoke to Missourinet at Thursday’s governor’s ham breakfast at the Missouri State Fair in Sedalia. He describes the state fair as one of the best in the nation.

Click here to listen to Brian Hauswirth’s full interview with U.S. Rep. Billy Long, R-Springfield, which was recorded on August 15, 2019 at the Missouri State Fair in Sedalia: