The state legislature has approved a bill that would bar the use of telemedicine to administer abortion-inducing drugs. 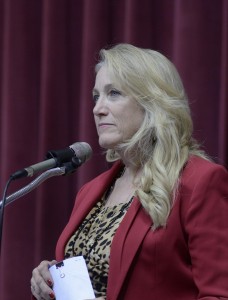 The bill (HB 400) would require that when a woman is using RU-486 or another abortion-inducing drug she must be in the presence of her doctor, rather than have him monitor her by a videoconference.

“We’ve had 15 deaths and well over 1,000 … 1,300, 1,500 serious complications with this drug. We’ve had two in the United States … two teenage girls that bled to death at home because they were afraid to tell their parents. Yes, this is about quality care for women.”

Rep. Genise Montecillo (D-St. Louis) says Riddle overplays the risks, and is not genuine in stating her motivation.

Other opponents argued that the drug is meant to be administered and followed-up on at home.

The proposal goes to Gov. Jay Nixon on veto-proof majorities in both chambers. Ten House Democrats voted with Republicans in passing it.

The House has passed a bill to stop so-called “webcam abortions.” It would bar in Missouri the administering of “abortion-inducing” drugs to a woman in one location by a doctor teleconferencing with her from another.

It’s sponsor, Representative Jeanie Riddle (R-Mokane) says her bill, HB 400, is not about preventing abortions, but protecting the health of women seeking them.

“The physician who is going to prescribe these drugs needs to take professional responsibility for the woman taken them. Women need protection from unscrupulous medical people who want to take their money with a cushy job, no equipment to purchase, no late nights, no 3 a.m. emergency visits.”

Riddle offered statistics and argued that such drugs are dangerous to women, but Democrats rejected that argument as a scare tactic.

Representative Genise Montecillo (D-St. Louis) told her colleagues, “The risks are the same as if the woman has a miscarriage … I think that this is just another attempt to interfere with a woman’s right to make good medical decisions for herself.”

Democrats say such procedures do not currently happen in Missouri, but Riddle suggests they are becoming more common in the U.S.

The legislation would also require a physician or representative to make all reasonable efforts to have a woman who has used an abortion-inducing drug make a follow-up visit between 12 and 18 days later for an assessment of her condition.

It now goes to the Senate for consideration.