You are here: Home / Archives for right-to-work

The sponsor of the so-called “right to work” bill in the House says he is optimistic after it received initial approval Wednesday, despite its opponents declaring victory.

The policy would prevent the paying of union dues from being a requisite for employment in private businesses in Missouri. Unions and Democrats say it’s an attack on workers and have declared the measure defeated, because it only got 78 “yes” votes. That’s enough for initial passage, or “perfection,” but more would be needed on a vote to send it to the Senate.

“I think this is a historic victory,” says Burlison.

Four more votes are what supporters would need to reach the constitutional majority necessary for the bill to clear the House and go to the Senate. Burlison thinks they can be found.

“To get to 82 is a small step from the 78. There’s a lot of room there,” says Burlison. “What’s clear is we’ve set the low water mark at 78, which is very good. I don’t know where the high water mark is going to be on the vote.”

19 Republicans voted with Democrats against the legislation, while 11 were absent and two entered neutral “present” votes.

The legislation faces a likely filibuster if it reaches the Senate but could result in a move of the “previous question,” a motion to shut down debate and force a vote … a rare move in the Senate.

Burlison says that potential means he has time to find four more votes.

“The Senate will likely not take this bill up until the last possible day,” says Burlison. “The PQ is something that you don’t want to have to do until the very end … there’s time.”

Even if “right to work” doesn’t make it out of the House, Burlison says its initial passage is a win.

“This is an absolute victory. It’s never happened in the history of the State of Missouri.”

See how state House members voted on “right to work”

National organizations are raising the stakes and the pressure on GOP lawmakers in Missouri to vote on a so-called “right to work” law, which would bar making union membership a requisite of a job. 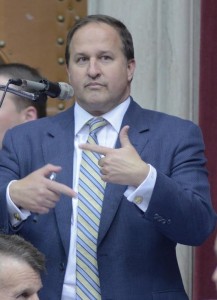 House Majority Floor Leader John Diehl (R-Town and Country) says the bill was going to be brought up Wednesday but he was asked to hold off by Speaker Tim Jones (R-Eureka) and others.

“The Speaker and the bill sponsor believed that there are some improvements that can be made in the ballot language, so they asked me to hold off on it,” says Diehl. “Assuming that the ballot language issue gets corrected, my plan would be to go to it on Wednesday of next week.”

Jones says he is confident that there is support for “right to work” in his caucus.

“If you look at our caucus of currently 108 people, I can definitely say there is a strong majority of that 108 that wants us to have a vote on that issue this year and move that bill forward.”

Diehl thinks the vote will be close, and Thursday’s House vote to pass what supporters call “paycheck protection” legislation could be seen as supporting that prediction. The bill passed 83-69 but 17 Republicans voted against it.

Called “paycheck deception” by Democrats and unions, the bill would require that workers annually sign off on whether unions can take dues out of employee’s checks. Opponents argue such deductions are already voluntary.

Jones has called “paycheck protection” a way to get to the goal or right-to-work.

The first GOP candidate in the 2016 race for Governor says she wants Missouri to become a right-to-work state.

“Right to Work” is what supporters call the policy that would bar the practice of making the payment of union dues a requisite of employment.

“I absolutely want Missouri to be on a level playing field with all the states that are attracting major auto plants, major manufacturing plants and they’re just flying over Missouri,” claims Hanaway.

She says she would also back what supporters call “paycheck protection.”

“I think protecting the paychecks of people who do work in union environments so that their dues aren’t spent on political campaigns that they don’t support … it would be a step forward.”

Hanaway also says she would support a tax cut proposal such as what Republican lawmakers are trying to send to Governor Nixon this year, but doesn’t say she would have signed the bill that Nixon vetoed last year.

“I think there were improvements that needed to be made to that bill,” says Hanaway, “but that’s where you need leadership from the Governor. The legislative session’s five months long. The legislature didn’t keep it a secret that they were gonna pass a tax cut. If there were improvements to be made the Governor should have been walking the halls … and have discussion with the legislative leaders and try and shape the bill into something that he can sign.”

Hanaway says she will spend this year traveling to Republican events throughout the state trying to raise money and support to take on Democratic gubernatorial candidate Chris Koster.

Some Republicans have expressed disapproval of Hanaway announcing as a candidate so early, and say it is disrespectful to others who might choose to run.

The House Committee on Workforce Development and Public Safety is holding a hearing at this hour on proposed “Right to Work” legislation (HB 1099) sponsored by Representative Eric Burlison (R-Springfield). House Republican Leadership has said “Right to Work” will be a priority again this year, as evidenced by holding a hearing on the first Monday of the legislative session.

Supporters say “Right to Work” would bar the payment of union dues from being a requisite of employment, and argue that businesses have taken jobs out of Missouri or chose not to bring them here because Missouri is not a “Right to Work” state. Opponents say it would allow some workers to become “freeloaders” who benefit from union representation without paying for it.

Chairman Bill Lant (R-Pineville) says the committee will not put time limits on testimony but will cut people off if their testimony becomes “redundant.” The Committee will take a break at 2:00 if necessary.

Watch a live stream of the hearing here.

A House bill including more than 20 provisions related to public safety includes a proposal to make it illegal for union dues payment to be a condition of employment for law enforcement in the state. 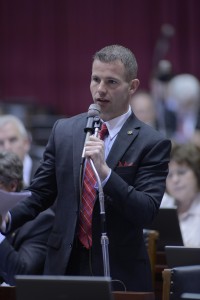 Called “right to work for cops” on the floor by an opponent, the language was offered in an amendment by Representative Rick Brattin (R-Harrisonville), who says it will protect officers.

Representative Jeff Roorda (D-Barnhart), a former police officer, says because police unions negotiate for issues including workplace safety, this could result in unsafe conditions for some of the state’s law enforcement officers.

House Speaker Tim Jones (R-Eureka) says the idea was brought to his caucus by police officers from Kansas City.

“I met with them, men and women on that police force of all different, diverse backgrounds, and they asked us to move that piece of legislation forward … They said they were being disenfranchised, their voices were not being heard, they had no choice in the matter and so these are folks who are rank-and-file union members who have asked us to promote worker freedom.”

That omnibus package, HB 335, has been sent to the Senate.

Missouri’s Republican House Speaker says in spite of the passage of right-to-work in Michigan, he doesn’t expect to make it a priority in Missouri but will pursue paycheck protection. 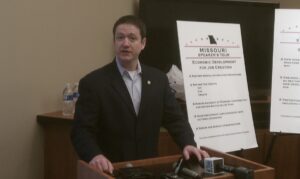 Speaker Tim Jones (R-Eureka) says he supports right-to-work, which keeps union membership or dues payments from being a condition of employment, but he doesn’t think it would pass in Missouri without the backing of Governor Jay Nixon even with veto-proof Republican majorities in both chambers.

“We have 110 members in the House. That’s more of a number than a reality on every single issue. I understand that I have a lot of members who are very conflicted on a variety of issues. Every district is not the same.”

Jones instead will add to his agenda paycheck protection, which requires unions to get permission annually from its members to use fees or dues for political contributions. Jones thinks that would achieve the same goal as right-to-work, and he believes it can pass.

“Money is extremely important to the labor unions. They are the biggest opponents to us on that level and I look at what happened in this last campaign cycle and most of the Democrats in this state rely on that money which is forced from hard-working workers into those coffers.”