You are here: Home / Archives for Republican Party

Polls will open Tuesday morning at 6 and will close at 7 p.m. statewide.

Under Missouri law, you can only choose one political party ballot at the primary: Republican, Democratic, Libertarian, Green or Constitution.

Poll workers will ask you to choose one of the five party ballots, so you will need to declare your party affiliation on Tuesday.

There are several former Democratic presidential candidates who’ve dropped out who remain on Tuesday’s ballot in Missouri, because it was too late to take them off the ballot.

Missouri’s Legislature adopted the presidential preference primary in 1986, for one PPP to be held in 1988. At the time, some said it was aimed at helping then-U.S. Rep. Richard Gephardt, D-St. Louis County, in his 1988 presidential campaign.

Congressman Gephardt ended his presidential run in March 1988, and ran again and was re-elected to his congressional seat.

Missouri used caucuses in 1992 and 1996. In 1998, the Missouri Legislature approved a PPP with no expiration date. That was Senate Bill 709, which was signed by then-Governor Mel Carnahan.

The Missouri Secretary of State’s Office encourages anyone with questions about Tuesday’s presidential preference primary to call Secretary Ashcroft’s office. That number is 1-800-669-8683. 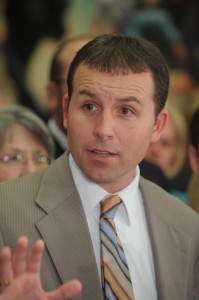 “I started this session wanting to change the tenor and the tone of how things are done in Jeff City,” Tilley told reporters. “And, I think it is pretty clear that we’ve done that.”

Now, that’s easy for the head of the majority in the House to say. But it’s backed up by the House Minority Leader, Mike Talboy, a Democrat from Kansas City.

“You saw a, with the exception of maybe just a couple of times it even getting really, really chippy, I think things went really very smoothly and I think that the body’s better off for it,” Talboy stated, “because I think when you actually have substantive debate and people can listen and people can have input and have a back and forth and really vet out some of the issues, (I) think that is better for everybody.” END_OF_DOCUMENT_TOKEN_TO_BE_REPLACED

The limit of criticism was tested on the House floor as Democrats harshly criticized majority Republicans for pushing pay-day loan reform they claim is anything but.

Battle lines were drawn from the start of debate on the House floor over HB 656. Republicans pushed the measure as reform of the pay-day loan industry, under scrutiny for its extremely high interest rates and suspect tactics. Democrats railed against the measure as fake reform, an attempt by Republicans to convince the public they are reforming the industry while actually protecting it.

Still accused Republicans of orchestrating the moves so that they wouldn’t have to vote on her amendment.

“What they have done is freeze my amendment out,” Still said on the House floor. “It indicates that they are afraid to take a vote…”

With that, Still’s microphone was cut off.

Speaker Pro Tem Shane Schoeller, a Republican from Willard who was presiding, warned her to stay on topic, a comment that brought Rep. Chris Kelly, a Democrat from Columbia, to his microphone. Kelly objected to Schoeller’s contention that Still wasn’t arguing the issue at hand.

“To not let her speak is a disgrace,” Kelly told Schoeller. “She’s arguing the issue and you ought to let her do it.”

That brought Rep. Darrell Pollock, a Republican from Lebanon, to his mic.

“The lady has every right to speak on this bill. She has the time like every one of us out here,” Pollock responded, his voice rising with emotion. “We have rules for this body and these rules need to be followed. This is not some dog and pony show to get up here and poke people in the eye with.”

Passions seemed to cool; for a while.

Rep. Jake Zimmerman, a Democrat from St. Louis, stood on the floor to criticize the bill. Pollock rose again to object, calling on Schoeller to direct Zimmerman to confine his comments to the bill.

“I think your comments have gotten off the direction of the bill. I’d advise you to please stick to the bill and, while you’re witty, please keep to the bill itself and not your personal opinion,” Scheller told Zimmerman.

That brought the gavel down again. Zimmerman, admonished once again, continued his criticism of the bill.

It now has advanced in the House. It needs to pass another round of voting to move to the Senate. 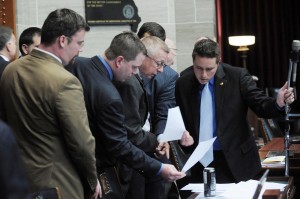 Budget work in the House went smoothly, for the most part.

But partisanship can be held down only so long. Debate on the House floor veered from discussion on how best to spend state tax revenue into proposals to strip money from state officeholders.

It began with an amendment sponsored by Rep. Jamilah Nasheed, a Democrat from St. Louis, to strip $500,000 from the travel budget of Governor Nixon, also a Democrat. Republicans, who hold the majority in the House, quickly jumped on the idea. House Budget Committee Chairman Ryan Silvey, a Republican from Kansas City, endorsed the idea.

“We’ve got a pretty simply choice here,” Silvey told the body during House floor debate. “Do we let the governor continue flying around excessively on the state plane or do we help kids in inner city St. Louis who need a leg up?”

Not to be outdone by the Republicans, House Democrats took aim at Auditor Tom Schweich, a Republican.

Rep. Sara Lampe, a Democrat from Springfield, backed an amendment to strip $185,000 from the Auditor’s office to beef up Parents As Teachers. Lampe contended the Auditor shouldn’t receive the money, allocated to pay four salaries of positions left vacant by the previous auditor, who happened to be a Democrat.

Democrats argued that everyone in state government is tightening their belts and the Auditor’s office should as well.

The amendment stripping money from the governor’s office passed. The auditor amendment failed.

House Republicans claim they have wasted no time in working on job creation legislation this year. Democrats have their doubts.

House Speaker Steven Tilley, a Republican from Perryville, stated prior to the legislature leaving on its spring break that the House has acted quickly to improve the state economic climate.

“All the business groups came together and they came up with the ‘Fix the Six’ proposals and they basically said to us if you can fix these six problems that we think we can create jobs,” Tilley told reporters during a Capitol news conference. “I think there was no secret that this caucus’ top priority was addressing the 9 1/2 % unemployment that we have in this state and trying to put people to work.” END_OF_DOCUMENT_TOKEN_TO_BE_REPLACED

A major issue hangs over the heads of state lawmakers, waiting for them next week when they return from spring break.

House Speaker Steven Tilley, a Republican from Perryville, admits he was too optimistic when he stated at the beginning of the session that he wanted to have congressional redistricting resolved by the end of February. Still, he doesn’t believe it will be a distraction.

“And that was my point at the beginning of session. I’d like to get this moved on, so we’re not worried about it,” Tilley told reporters at the Capitol. “So, I would suspect the week we come back to session you will see some action either in the Senate or in the House.” END_OF_DOCUMENT_TOKEN_TO_BE_REPLACED

Lt. Governor Peter Kinder appears to be the leading Republican candidate for governor, but he hasn’t announced, yet.

“I’m proud to introduce him tonight as he stand before you and stands with me as our lieutenant governor and, I believe, the guy who can be the next governor of Missouri, Peter Kinder,” Blunt stated.

We asked Kinder if that was an indication of how he is leaning.

“It was an indication of how he’s leaning,” Kinder responded. “And I will make a statement on the day I decide to officially announce of what I’m going to do.”

Kinder hosted the reception that opened Lincoln Days in Springfield. He shook many hands, greeted many Republicans, tirelessly working the halls and banquet rooms. He told the Missourinet in an interview that the political support among his fellow Republicans seems to be there. Indeed, it wasn’t just Blunt who speculated during the weekend that Kinder could be the next governor.

Kinder said the real test is whether he can secure the financial commitment to pay for a gubernatorial campaign. He noted that he had raised $6 million in two runs for Lt. Governor, adding that he would have to “step up his game” if he wanted to run for Governor, especially since a run in 2012 would be a run against incumbent Democrat Jay Nixon.

“That’s a daunting challenge, because an incumbent governor in our state can raise any amount of money,” Kinder told us.

Talk of Kinder for governor increased after he grave a half-hour speech at the Friday evening banquet. Kinder lashed into Nixon in the speech, criticizing him as a spectator, rather than a fighter for Missouri. Kinder did all but announce his candidacy. Still, he stopped short of any formal announcement. He said he will make an announcement in 90 days.

Missouri Republican Party Chairman David Cole shied from answering the question of whether he would like to see Kinder run.

“That’s up to Governor Kinder,” Cole stated, using the proper reference for the office. “I think that should he choose to take that jump I think he would be a great candidate and I think he’d be a great governor.”

Two are in. A third appears ready to jump in. More might be coming.

A dominant question on the minds of many Republicans attending Lincoln Days in Springfield this past weekend was: who would be the best candidate to unseat Democrat Claire McCaskill as United States Senator in the 2012 election? END_OF_DOCUMENT_TOKEN_TO_BE_REPLACED

It seems the contents of the speech might focus on the same issues the governor has during his first two addresses to a joint session of the General Assembly. It might be the make-up of the audience that is different. Nixon, a Democrat, faces a legislature controlled by Republicans. Election victories in November have given Republicans a 106-to-57 advantage over Democrats in the Missouri House, 26-to-7 in the Missouri Senate. Nixon, looking toward re-election in two years, must reach compromise with Republicans to get any proposals through this year.

Still, whether Republican or Democrat, the budget remains the issue this year. END_OF_DOCUMENT_TOKEN_TO_BE_REPLACED 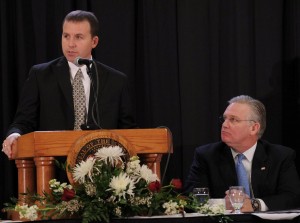 Republicans have firm control of the Missouri House this legislative session and might tap a rarely used power during budget proceedings.

House Speaker Steven Tilley, a Republican from Perryville, is proud of the gains made by Republicans and made that clear as he began a news conference at the Capitol.

“Let me be the first to officially introduce to you the largest Republican majority in the history of this state,” Tilley said to a thunderous ovation from the 106 members of the Republican Caucus. END_OF_DOCUMENT_TOKEN_TO_BE_REPLACED