You are here: Home / Archives for Representative Chuck Basye

State law could be changed to require that Missouri public school districts tell parents if class material, guest speakers, or displays in school mention sexual orientation or gender identity. The Missouri House Elementary and Secondary Education Committee is debating State Representative Chuck Basye’s bill that would let parents have their kids removed from class if they do not approve. Basye, R-Rocheport, says the bill is in response to a Columbia middle school Gay/Straight Alliance Club putting posters up without parents knowing. 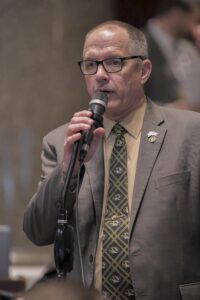 “I think the parents have a right to know what is in front of their children in public schools,” says Basye. “That’s the intent of the bill, nothing more nothing less.”

Under the legislation, Missouri schools could be sued for violating the terms. Basye, the chairman of the committee, says concerns of parents “tend to fall on deaf ears”.

“A lot of people, a lot of parents feel that they’re not listened to, by whether it’s the school board, the administration, or what have you. That’s the design of the last part of this bill is to give this a little bit of teeth so parents can take action if they feel that they’re not being listened to or their child is subjected to something they don’t agree with,” says Basye.

Representative Raychel Proudie, D-Ferguson, says the measure treads on dangerous ground. She has served as a school teacher and counselor in public and charter schools in Missouri and elsewhere.

“I would argue there’s no better place for information or a learning place than a school setting,” says Proudie. “I don’t see any like nude pictures or questionable words as far of obscenities on here. So, I’m not really clear what the issue was with this. If I put ‘Jesus Saves’ up though, I could certainly see how my Jewish student would have an issue with that. I don’t take offense to your wanting to be involved in your child or your children’s education and the education of your community. But, I do insist that we’re not just talking about sex and sexuality but the actual worthiness and personhood of a group of individuals.”

Kansas City Democrat Judy Morgan, a retired school teacher, says teachers should be able to teach all students about some important historical figures, including LGBT individuals. She cites Harvey Milk, the first openly gay man to be elected to a public office in San Francisco, California. He served on the San Francisco Board of Supervisors for ten months before a former board member assassinated him.

“If any LGBT student or an ally is in that class, and they know that these students are being removed because you’re teaching about an openly gay politician, that’s going to stigmatize those kids,” Morgan says. “That’s going to hurt those kids.”

Columbia school parent Jay Atkins says there is space to have such conversations in a responsible way as educators and parents, but lines must be drawn to limit them to human sexuality curriculum.

“I think that it would be perfectly appropriate to teach about the history of Harvey Milk and the LGBT struggle for equal rights throughout the course of our country,” he says. “Where I think we’re starting to get into some grey waters is if the content of the Harvey Milk curriculum, or the Abraham Lincoln curriculum, or the George Washington curriculum, or the Harry S. Truman curriculum, if we start talking about what their preferred gender identity and sexuality was and how that impacted their health and well-being, I think that we’re in the realm of content governed under this statute.”

Another issue of contention is whether the measure infringes upon individual free speech.

“This is not only way too far reaching, but absolutely censorship of essentially livelihoods and existence at all,” says Jay-Marie Hill with the American Civil Liberties Union of Missouri.

Hill argues that the bill goes as far to make teachers responsible for what a guest speaker might say, possibly leading to termination if the potential law is broken.

The committee has not voted on House Bill 1565.

Missouri public school districts could be required to have at least one armed officer in every building during normal school hours. The House Elementary and Secondary Education committee is considering the bill sponsored by State Representative Nick Schroer, R-O’Fallon. It would also have retired police officers, educators, military members or veterans, or volunteers serve in the paid or unpaid roles. Under the proposed mandate, the individuals would have to complete training prior to starting. 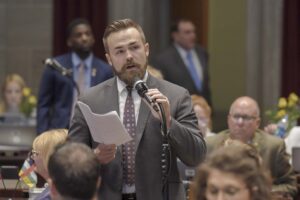 During a public hearing, Representative Chuck Basye, R-Rocheport, says he backs the measure.

“I think we should try and do everything we can to make sure our children are as safe as possible,” says Basye.

“Some of the most heated times that we’ve had, where I was truly concerned about behavior or somebody being violent was at ball games, when you have those extracurricular kinds of times,” she says.

The legislation would put an administrator’s or employee’s job in jeopardy if they fail to ensure that an armed officer is on duty.

“I don’t see why any school district, even though we have 60% of them so far that have RSOs, why would they go the extra mile to ensure the safety of their children if they’re not required to and there were penalties if they didn’t do so,” says Schroer.

“We have concerns that when you create this mandate, but there’s no funding attached with it, which may be an Article 10 violation, that creates a pressure for the school districts,” says Fagin. “Do we cut staff in other areas so that we can have school resource officers? The governor’s safety task force – they talk about the best solutions designed through local governance and that one size doesn’t fit all and we agree with that very strongly. That’s why we have concerns about a bill that mandates this. We would probably have no objection whatsoever if the state were wanting to invest in supporting school districts having more access to resource officers in every school.”

“Most school violence is not the mass shootings that we see at Parkland or Sandy Hook. Most of those incidents – 78% – are guns brought to school by students from home,” says Gilbert. So, we need to ensure that parents are aware that safe storage is a critical factor in keeping their children safe.”

The state has 518 public school districts and about 2,400 school buildings.

The committee has not yet voted on House Bill 1961.