You are here: Home / Archives for Representative Andrew McDaniel

State Representative Hannah Kelly, R-Mountain Grove, wants to ban some registered sex offenders from going within 500 feet of any Missouri Conservation Department nature or education center. The Missouri House Public Safety and Crime Prevention Committee is considering Kelly’s bill, which could charge violators with a felony. The measure would apply to sex offenders who have committed certain sex crimes against children. 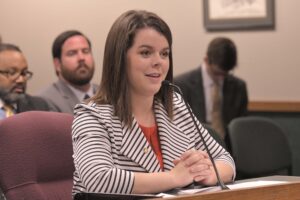 “We have an ultimate responsibility to ensure that when the prosecutor goes after that individual for perpetrating evil crimes against a child, that we have teeth in the statute to make sure that the next person who might think about doing that, decides not to because they see the proper punishment has been handed down,” says Kelly.

“How this got on our radar was simply off-duty police officers or conservation officers participating in programs at our nature centers recognizing registered sex offenders and not being able to do anything about the situation,” says Jeffries.

Representative Andrew McDaniel, R-Deering, says the legislation would not stop someone from trying to do something bad to a child.

“The ones that are still abiding by the law and are going back into society and being decent people still – trying to – but we keep pushing them into corners by keep on adding more obstructions to their daily life,” says McDaniel. 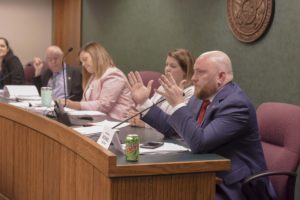 Kelly agrees that there are good and bad actors, but she says parents should not fear that someone with ill intent will harm their children when their kids step off the bus at one of the centers.

“At the end of the day, we fund these centers. These children are welcome then to these centers and along with that comes a great responsibility of their safety. It is unfortunate when individuals, as you have mentioned, have to deal with the labeling of being on that registry, but I look at that as a separate judicial matter,” says Kelly.

Kelly says tweaks are being made to the legislation that would allow registered sex offenders who are the parent, legal guardian or custodian of a child under 18 years old to attend programs with their children on such property. The changes would allow the individuals to get permission from the nature or education managers to be present on the property during programs with their kids.

The committee has not yet voted on House Bill 2142.